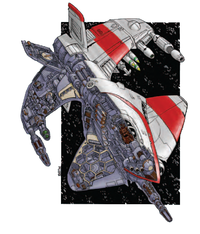 Aerospace fighters are similar to Conventional Fighter aircraft, but are capable of operating in both an atmosphere and in space, which makes them far more versatile. They use fast-pumping, dual-chambered fusion engines, instead of the jet or turbine engines usually employed by conventional fighters, which makes them immune to engine stalling and overall provides them with far more durability, as well as comparatively more space for their loadouts. However, they are much more expensive and use advanced technologies much harder to manufacture compared to conventional fighters and BattleMechs, which prevent them from gaining a dominant role on the battlefield.[1]

Aerospace fighters utilized much of the same technology as BattleMechs, such as using thin strands of myomer to control flight surfaces. For most, flight controls remain traditional with control sticks and touchpad screens, supported by a simple helmet-based HUD which displays basic information such as fuel, ammunition and sensor readings.[2] During high-G maneuvers, for most fighters a selection switch on the secondary control stick allows the pilot to utilize the touchpads.[2] Pilots wear neurohelmets which use their kinesthetic sense to help perform maneuvers and view their environment through a holographic head's-up display. Unlike the HUD of its terrestrial-bound cousins, aerospace fighter HUDs are bowl-shaped to account for the three-dimensional battlefield, with the center of the bowl aligned with the nose of the craft.[3] Aerospace fighters of the Star League Defense Force were much more advanced, with control of the craft literally in the hands of the pilot through special gloves which, in combination with a more advanced neurohelmet that detected neural impulses to a greater degree, allowed for much quicker and more efficient maneuvers. The HUD was also replaced with a virtual reality display covering the entire cockpit, allowing for greater amount of information to be displayed.[2] Post-3065, more Inner Sphere fighters have begun to incorporate some of this technology, such as helmets which detect subconscious signals to replace the touchpad selection switch.

Aerospace fighters are divided into three categories, based on their chassis mass: