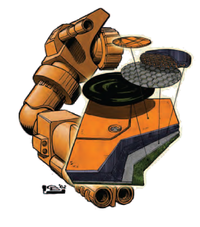 Modern BattleMech and vehicle armor plating was originally introduced in 2470 by the Terran Hegemony[1]. In the BattleTech universe, armor is ablative in nature. This means that it is generally destroyed or blown off when hit, but in the process of doing so, it absorbs enormous energies, protecting the unit it is mounted on. While powerful blows will still rock a vehicle, there will be little, if any, internal damage as long as armor plating still remains. Armor-piercing rounds do exist for certain weapons, but they require a higher technology level and cost more. As a result, destroying a 'Mech requires either immense firepower, concentrated fire on a vulnerable location, or a lucky hit.

Standard BattleMech armor is composed of several layers providing various degrees of protection and support. The first layer is extremely strong titanium alloyed with steel, the result of crystal alignment and radiation treatment, which is also very brittle. The second layer is a ceramic, cubic boron nitride, which combined with a web of artificial diamond fibers acts as a backstop to the steel layer. These two layers rest atop a titanium alloy honeycomb structure which provides support, and a layer of self-sealing polymer sealant which allows for space and underwater operations.[2]

Noting the ablative nature of the armor, most vehicle designers have designed the armor for quick repairs on most units. In game terms, armor is repaired at the rate of 15 minutes per point of armor[3]. Players familiar with BattleTech video games —like MechWarrior 3 and 4— might be used to even faster repairs by mobile field bases (where a damaged 'Mech is apparently repaired in moments), but the computer games represent repairs differently than the tabletop game.

Armor for BattleMechs & vehicles is manufactured on the following planets: