First constructed by the Terran Hegemony in 2391, each Castle Brian (pl.: "Castles Brian") was a massive defensive fortress. They were built on numerous worlds during the Hegemony and Star League eras. 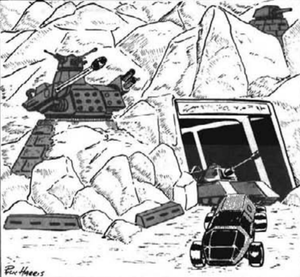 One of the Castle Brian fortification complexes.

Named after Director-General Brian Cameron, Castles Brian were originally constructed during the time of the Terran Hegemony as a buffer between it and the Draconis Combine, with the first Castle built on Telos IV. Within thirty years over a hundred more were built, all along the Hegemony's borders and on important internal worlds. While a tremendously expensive endeavor no one questioned the Director-General's decision to build them, and events during the Age of War would prove this effort to be prudent.[1][2] In the wake of the Reunification War, with the formation of the Star League, the Star League Defense Force took control over these structures and more were built in the Periphery as a means of controlling the rebellious population.[3][2] Unfortunately when First Lord Richard Cameron withdrew the SLDF from the Rim Worlds Republic in 2755, he gave control over these Outpost Castles to his good friend Stefan Amaris. Amaris' troops occupied these fortifications and studied them so that, with the onset of the Amaris Civil War, Republican forces had a thorough understanding of the structures and how to defeat them.[4][2] The total number of Castles Brian constructed has never been found, in part thanks to the skill of the Hegemony in building them right under the noses of friends and allies, and as a result many became lost after the end of the war as Aleksandr Kerensky took the surviving SLDF with him on his Exodus. Soon even the method of their construction became lostech, as did many other wondrous technologies like stasis chambers and weather control satellites. The over twenty Castles located on Terra were eventually taken over and used extensively by ComStar, which were in turn taken over by the Word of Blake.[2]

The textbook definition of a Castle Brian had a minimum of twenty heavily armed turrets carrying an assortment of direct fire and missile weaponry, fifty smaller turrets and a hundred smaller antipersonnel bunkers. These were usually the only visible structures of the fortress, which was usually built deep inside a mountain and safe from all but the heaviest nuclear or orbital bombardment. An average of ten levels allowed enough space to store two brigades, which could quickly emerge from any of five secret exits.[5] The reality was that no two Castles Brian were alike, and there were several different classifications for these types of fortified structures. Almost as impressive as the structures themselves were the lengths taken to build them in secret in some of the remotest regions of a planet, including diverting an entire sea to build a Castle on the seabed and flooding the area once more.[2]

While often mistakenly believed to have been built to prevent invasion or takeover of a planet, the static fortresses were not meant to protect anything other than themselves and the forces contained within. With the limited resources of the Terran Hegemony compared to the nations of the other Great Houses, and the later Star League's sheer size preventing blanket defense coverage of most worlds, a Castle Brian was intended to be a hindrance against a blitzkrieg invasion, storing enough weapons, food and men to allow any defenders to hold out and harass the invaders hopefully until reinforcements could arrive. In effect their very presence acted as a deterrent against invasion for, while an enemy may succeed in capturing a planet, the presence of one or more Castles would prevent them effectively controlling it bar sufficient garrison forces.[5][2]

The correct plural form is Castles Brian[6]; the name stems from the first name of Brian Cameron[7].

The exact number of Castles Brian in the Inner Sphere and Periphery is unknown, but in 2423 The League had already 120 of them. The planet with the biggest number (outside Terra) was Lambrecht, with six of them.[8] Earth had at least twenty. On the planets in a radius of thirty light years around Earth, there are Eighty-three.[9]

The SLDF divided the defense structure into several classes as described below.

The term Brian Cache, describing a Clan equipment store (typically one established during the demobilization process Kerensky created upon arriving in the Pentagon Worlds), is derived from the Castle Brian fortresses.