Chandrasekhar Kurita (b. 2994 – d. 15 February, 3076[1], aged 82 years) was one of the lesser-known members of the Kurita family, with a wide range of public and secret business interests, making him one of the richest men in the Draconis Combine. A fat and jolly character affectionately known as Uncle Chandy to his friends, his appearance and public persona deliberately mask a canny political and business mind, working to protect the Combine from external as well as internal enemies. 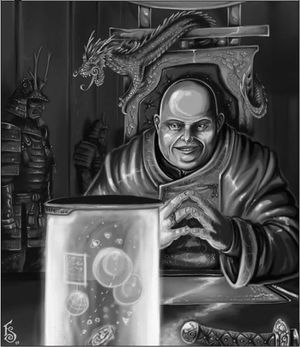 Far from the stereotypical Kurita male pursuing military glory, Chandrasekhar instead embraced business and commercial interests. At court, he earned his "Uncle Chandy" nickname for the familiar role he played toward a younger Theodore Kurita (this despite actually being distant cousins, with Chandrasekhar only three years Theodore’s senior). Considered a wastrel, he was ultimately exiled from court by Takashi Kurita, but this punishment did nothing to abate his hedonistic lifestyle. Always considering the long view, while his peers fought amongst themselves for scraps of power and influence, Chandrasekhar Kurita quietly built a sprawling business empire and became one of the richest men in the Draconis Combine.

Despite his public focus on the business world, Chandrasekhar worked behind the scenes to protect and promote the interests of the Combine. He hired the mercenary regiment Camacho's Caballeros to initially protect Hachiman Taro Electronics on Hachiman, but they eventually were used to protect Theodore Kurita from the hardline Kokuryu-kai traditionalist group. Attempting to combat the turmoil and confusion affecting the Combine due to the Word of Blake's Jihad, Chandrasekhar was forced to take a more public route than before in assisting opposition to the Blakists.

Beginning on the 18th of February 3073 after receiving permission from Archon Peter Steiner-Davion of the Lyran Alliance, Chandrasekhar established a base on the Alliance world of Arcturus for a multi-national coalition force he had gathered together to oppose the Word of Blake.[2][3]

He was killed by Blakist operatives in February 3076,[1] following his release of DCMS security assets in exchange for mercenary protection.[4]

Uncle Chandy in his command center