The Clan Homeworlds were the worlds ultimately settled by the Clans, far beyond the Inner Sphere in the Coreward Deep Periphery, behind the Caliban Nebula.

They include the original worlds settled by Aleksandr Kerensky and the Star League Defense Force at the end of Operation Exodus, when in August 2886 they reached a cluster of five marginally habitable worlds, called the Pentagon Worlds for the cluster's near-perfect pentagonal shape. Here they established a new government called the Star League in Exile, and in the following years explorer expeditions of nearby regions of space found another nearby cluster of habitable worlds, called the Kerensky Cluster, the most important of which was Strana Prime.

Exploration would continue after Nicholas Kerensky's Second Exodus, while he formed the Clans and prepared to return to the Pentagon in Operation Klondike, and in the following decades known as the Golden Century, eventually settling the whole Cluster.

The Tanis system was discovered and occupied by Clan Cloud Cobra in 2965. During the Wars of Reaving a reborn Clan Burrock would occupy the system, and the Clans' intervention would leave the system devastated and was abandoned.

The Colleen system was discovered and occupied in secret by Clan Blood Spirit in 3067, as the Wars of Reaving started to rage on and they retreated to this system which was unknown to the other Clans until 3082. Eventually it was discovered and abandoned after the Spirit's destruction by Clan Star Adder. 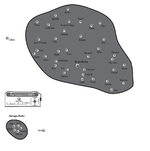 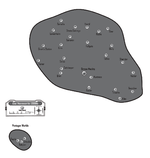