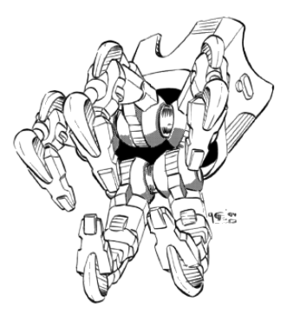 A BattleMech Claw is a melee weapon most frequently used in the arena fighting on Solaris. The Claw consists of a series of hardened steel blades mounted on reinforced tungsten frames. Mounted in place of a 'Mech’s hand actuator, the Claw is used to grab, twist, and otherwise shear off an opponent's armor plating.

The Claw may have inspired the Talons created by the Jade Falcons.

A Claw can only be mounted in an arm and takes the place of a hand actuator. The Claw inflicts 1 point of damage for every seven tons of weight. It uses up one critical slot for every fifteen tons of 'Mech weight (rounding up).[1] Because the Claws are bulkier and less agile than the standard hand actuator, they inflict a +1 to hit penalty.