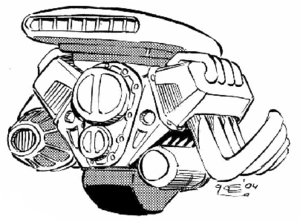 An example of an Internal Combustion Engine

For all intents and purposes identical to a modern internal combustion engine, the I.C.E. in BattleTech is used mainly for conventional vehicles and IndustrialMechs. Its power output is less than a fusion engine of similar mass, meaning an I.C.E. needs to be heavier in order to have the same engine rating of a fusion engine. In fact, it has the greatest weight-to-rating ratio of all the engines available in the TechManual. Internal combustion engines cannot power energy weapons without power amplifiers, unlike fusion engines.

The saving grace of the I.C.E. is its cost. Since they are considerably cheaper and easier to manufacture than fusion engines, the I.C.E. is used in the many conventional vehicles that tend to form the backbone of a planetary militia.

The I.C.E. is generally more robust than the typical Fusion/Fission engine, and if shot at in a combat capacity whilst mounted in a 'Mech, the engine class, while damaged will not contribute to overheat of the 'Mech where this damage was taken. However, this comes at the risk that the engine, or fuel powering said engine can explode when hit.[1]A single strike to the engine of a common Combat Vehicle is usually enough to completely immobilize the unit however.

Many I.C.E.s can use practically any combustable material as viable fuel. It is worth noting that due to the nature of an I.C.E, they must be used in an environment with a suitable atmosphere, unlike a Fuel Cell, or more expensive Fusion or Fission Engine.

Internal Combustion Engines are manufactured on the following planets: