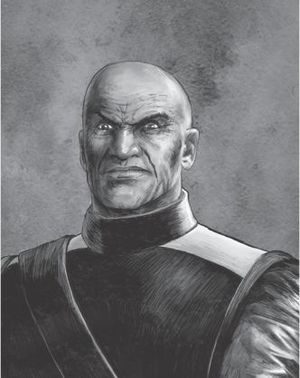 Ion Rush (born 3006[1] – died 3??? ) was the gao-shiao-zhang (Lord General) of Warrior House Imarra and, thus, the spokesperson and Grand Master of the Blessed Discipline of Warrior Houses in the Capellan Confederation. As such, he was one of the Chancellor's most trusted advisers.[2] He was also noted for his role in the assassination of Chancellor Romano Liao.[3]

Ion Rush came to the fore following the Fourth Succession War and the almost complete devastation of Warrior House Imarra. During that battle on Sian, Rush was able to defend the members of House Liao, earning him the incredibly rare trust of Chancellor Romano Liao.[4] Rush became the Master of Imarra after the war, succeeding Master Yadi, who retired after the battle on Sian. As commander, he strove to restore the Warrior House's lost prestige and reputation.[1][5]

On 20 April 3052, Rush met with Candace Liao aboard the DropShip Dao over Hexare. After determining that she wanted what was best for the Confederation, just as he did, he helped Candace get to Sian so that she could assassinate Romano and her lover, Tsen Shang.[6]

In 3057, Rush led all nine Warrior Houses into battle. The largely ceremonial gesture allowed the Warrior Houses to regain the prestige they had lost during the Fourth Succession War by liberating the ancestral fiefdom of Liao.[3] Rush then led Imarra against Styk. Though he failed to reclaim the world for the Confederation, he proved that Imarra had recovered.[1][5]

In 3058, Chancellor Sun-Tzu Liao tasked Rush with going after the Sarna Supremacy.[7] The Capellans conquered their breadbasket world of Kaifeng and used it to manipulate the Chaos March state as they desired. Around the same time he informed the Chancellor of his previous ties to Duchess Candace Liao.[8]

During a meeting of his advisers, Sun-Tzu implied that Rush was known to leak information to Candace. This reminder of Rush's earlier treason inflamed Kali Liao. She had a bomb planted with the intent to assassinate Rush, though this failed. It was officially explained, including to Rush, as a gas leak.[9][10] Following the blast, he needed physical therapy.[11] In the end, he was augmented with myomer musculature, similar to that used in BattleMechs.[12] It could not, however, repair his damaged vocal cords, giving him a more gravelly voice.[13] His new myomer muscles did, however, make him among the strongest men in humanity.[14]

In 3062, in addition to assisting Talon Zahn in coordinating the Capellan-St. Ives War, Rush worked with Candace to minimize the damage from the Black May attacks.[15] On 25 July 3062, an assassin attempted to kill Sun-Tzu. Rush pushed Liao behind a credenza and dispatched the exoskeleton-suited, would-be assassin; but not before being shot twice in the arm himself.[16] His actions brought him fully into the Chancellor's trust.[3][14]

Rush was again tasked with defending Sian, this time as the commander of Warrior House Imarra. Word of Blake forces dropped onto the Capellan capital world in September of 3070. Rush made them pay for every inch of ground they took for the month they were there.[17]

Imarra and Rush did not fare as well in the surprise 3074 assault. The Warrior House was in a training session when they came under assault in January 3074. Initially, they believed the attack to be another training exercise. Rush's 'Mech was downed, but he returned only a few hours later piloting a Jinggau modified with experimental technology. Rush led from the front during that campaign. By the end of it, Rush was in command of an Imarra force that was less than a company in strength.[17]

In the 3082, Rush led the five remaining viable Warrior Houses into combat on Tikonov. There they eliminated Republic of the Sphere regiment Stone's Stalwarts. Not above making a statement of their own, forces from The Republic returned in early 3083. Stone's Brigade and six Hastati Sentinels regiments landed and ejected the Warrior House forces. Rush recognized that Warrior House tactical doctrines were at fault. The MechWarriors failed to utilize conventional supporting assets to their fullest. Rush asked for, and was granted, permission from Sun-Tzu to reorganize the Warrior Houses.[18]

Much as with Warrior House Imarra as a whole, Rush owed his loyalty first to the Confederation and second to any individual Chancellor. It was with this view that he believed Romano Liao needed to be removed from her position as Chancellor. He aided Candace Liao in her assassination of Romano in order to be rid of Romano's tyranny.[4]

Rush was jealous of Chancellor Sun-Tzu's appointment of Talon Zahn as Sang-jiang-jun. Rush coveted the position for himself.[1]