Joseph Cameron (2507 - 2549)[1] was a House Cameron Nobleman, Officer, Diplomat, Politician, and the 12th Director-General of the Terran Hegemony. 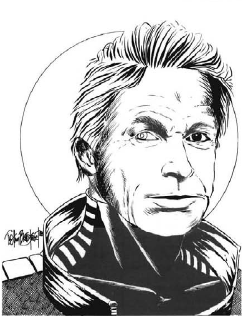 Oldest son of Deborah Cameron, Joseph Cameron joined the Hegemony Armed Forces and became combat officer in its Marine Corp. However, his career was cut short due to a training accident, which claimed his right eye. He was then transferred from field service to desk job. There while working for the Hegemony's Department of Foreign Relations, he became known as accomplished negotiator. He would openly support his mother's new Strategy of Aggressive Peacemaking initiative she would implement in 2540.

By age 35, he had ascended to the position as ambassador to the Lyran Commonwealth. His diplomatic career prepared him for new challenges of when he would ascend to the Director-Generalship.[2]

Director-General of the Terran Hegemony and his AssassinationEdit

In 2542, his mother retired as Director-General, she designated him as her successor. After ascending to the throne, he would announce he would continue to maintain his mother's Aggressive Peacemaking policies. However, unknown to him, some within the military became dissatisfied with the old Director-General's Peacekeeping policy, which favored diplomats over the military. This collective dislike policy became organized into a cabal, plotted against the Joseph. The over taxed the Hegemony Central Intelligence Bureau failed to alert Joseph on what would bring the Hegemony into crisis.

A member of the cabal was administrative clerk of the Hegemony's Marine Corp by the name of Captain Henry Green. The captain would take matters into his own hands being tired of Cabal's lack of action. In September 19th, 2549, he would enter the grounds of the Joseph's Palace on Terra patiently wait 27 hours for opportunity to lash his frustrations.

From a tree in Palace's grounds, he would take aim and fire his laser rifle as leave his Limo. Joseph had taken his laser resistant jack off just moments before when the Green's second shot would hit him. Six days after the assassination attempt, Joseph would die from his wounds.[3]

Joseph's death would mark the beginning of the Hegemony's September Revolt. Where his brother Ian, would take up the leadership of the Hegemony and found the original Star League.[4]