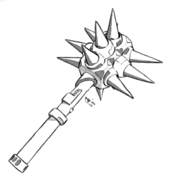 Appearing primarily on the arenas of Solaris VII, the Mace is a BattleMech scale Melee Weapon.

While initially little more than bulked out hatchets that traded a cutting edge for crushing ability when they first appeared in the Solaris Games in the mid 3050s, by 3060 the weapon had evolved into the heavier and distinctive definitive model. Despite finally reaching a production grade standard, the unwieldy and unbalanced nature of the mace compared to the hatchet or sword has made them rarely seen in general military 'Mech designs.

The Tactical Handbook mace follows the same rules as the hatchet save it does 2 points of damage for each 5 tons of the 'Mechs total weight. The Tactical Operations mace is an advanced weapon, weighs one ton and takes up one critical slot for each 10 tons of a 'Mechs weight, rounded up to the nearest ton, and inflicts one point of damage for each 4 tons of the 'Mechs total weight. Both versions of the mace may only be mounted in the arm of a BattleMech and only on an arm which features a hand actuator. While the Tactical Handbook version can be used on 'Mechs of any size, because there are only eight critical slots free on a hand equipped arm, no 'Mech heavier than 80 tons may mount a Tactical Operations mace. To emulate the extra bulk of the weapon, both version have a to-hit modifier (+2 for the Tac Handbook, +1 for the Tac Ops) when used and both versions require a piloting skill roll on each miss melee attack, with the Tac Ops version invoking a +2 penalty.