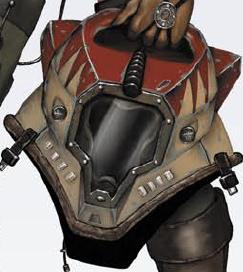 Critical to the functioning of BattleMechs, the Neurohelmet is worn by MechWarrior inside the cockpit and connects the pilot to their machine. At its most basic, the neurohelment allows the 'Mech to use its pilot's sense of balance to help keep it upright, with more advanced models providing additional benefits. Over time, the design of neurohelmets has changed, and while some seem outlandish they are for the most part comfortable to wear.

With a multi-ton Gyro and powerful Myomers in the limbs, BattleMechs can stand upright and remain balanced on their own, but the limited intelligence of 'Mechs and natural conservatism of their control computers means they often need to be told when it is acceptable to be off-balance, which may be helpful in battle as MechWarriors push their machines to the limits. The neurohelmet provides this by reading the brainwaves of the pilot, though rather than attempting to interpret the complexity of human thoughts it focuses on specific centers of the brain. By focusing on these easily translatable signals, the neurohelmet can help communicate a pilot's intentions to the DI computer; for example, whether a pilot wishes to avoid the enemy 'Mech it's running towards or throw itself forward to charge into it. As they became more advanced, neurohelmets could translate a pilot's intentions in other ways too, such as how delicately to pick up an item with their hand actuators.[1]

Thanks to the combination of physical controls and neurohelmet, talented MechWarriors can perform great feats in their 'Mechs, whether side-stepping an incoming missile or performing a handstand in controlled circumstances.[2] Learning to read a pilot's brainwaves accurately is a slow process though, particularly if a MechWarrior is using a new 'Mech for the very first time. Until a 'Mech has fully adjusted itself to its new master a pilot will often suffer headache-like pain due to electrical feedback from their neurohelmet.[3] Pilots can also suffer feedback from damage taken by their 'Mech during the course of battle, such as feelings of dizziness or headaches.[4]

The best neurohelments were those of the Star League Defense Force: the sensitivity of their biofeedback apparatuses was such that they did not require physical contact, and were capable of transmitting sensory data into the pilot's brain. It was not unusual for a Star League pilot to shutter their cockpit and fight using only the data they received through the neurohelmet.[5] There were limitations on this input though, since too high of a wireless signal would start frying brain cells, and the "virtual reality" provided was a poor substitute for physical displays. Nevertheless these helmets were of great value to their pilots, allowing them to directly access systems such as a 'Mech's tactile and kinesthetic sensors.[1][6][7]

During the Succession Wars neurohelmets greatly degraded in capability as the knowledge of the Star League became lostech. These bulky helmets required physical contact with the MechWarrior's scalp and had to rest on their shoulders, preventing them from turning their head. As a compensation they incorporated a monitor on the inside, taking sensory information from the 'Mech and compressing a 360° view to a 160° display. By the middle of the 31st century though, the Inner Sphere had recovered enough to where their helmets had improved significantly, though nowhere close to those of the Clans which retained the same technology as the Star League.[1][6][8]

Certain injuries such as inner ear problems or brain damage prevent a person from using a neurohelmet and thus a BattleMech.[citation needed]

It is standard for a neurohelmet to be coded to respond to the particular brain activity of their pilot. For a potential thief, they must either hope they are lucky enough that their brain waves are a close enough match to the owner's, or be in possession of a Neurohelmet Codebreaker. Otherwise, the thief is liable to suffer neurological damage, from nagging pain to worse.[3]

Additionally, during start-up of a 'Mech it is a standard security function among others for a pilot to wear their neurohelmet while thinking through several commands. If the DI computer determines there is a discrepancy, it can prevent the would-be thief from operating the 'Mech, even using the neurohelmet to "fry" their brain. On older, well-used 'Mechs, it was possible to circumvent this feature by running a magnet along the feed line from the security box, causing a lag in the security protocol and allowing the 'Mech to become operational without it.[9][10]

Aerospace Fighter pilots wear a variation of the standard neurohelmet to control their craft. Similar to their use with 'Mechs, the helmet reads the pilot's kinesthetic sense to perform maneuvers such as nap-of-the-earth flying.[11] They also possess similar security safeguards as 'Mech neurohelmets.[3]

The Combat Neurohelmet developed by ComStar is a much sought-after piece of equipment among MechWarriors. Lighter and less susceptible to damage than a standard neurohelmet, this model features a built-in Military Microcommunicator, sealable faceplate and one-hour emergency air supply. The sheer expense and rarity of the combat neurohelment makes it a hard catch for most MechWarriors however.[12]

The Clan Neurohelmet is the ultimate in neurohelment technology; in fact it looks more like a regular helmet than the torture device-like standard neurohelmet. It is lighter and hardier with all the same features as the combat neurohelmet. It is also incredibly more expensive and very difficult for someone not of the Clans to get their hands on.[12]

The SLDF Neurohelmet is considered the crowing archivement of the Star League 'Mech technology, allowing and interface between BattleMech and MechWarrior better than any other one developed at that time.

Circa 3055 only a few existed, most of them within the Com Guards, and a few with Word of Blake defectors.[13]