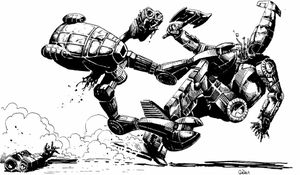 When normal weapons are damaged or run dry, physical attacks allow a 'Mech to continue the fight

Physical Attacks allow a BattleMech to deal damage to an opponent when in melee range with them, either by choice or accident. Depending on how they are constructed, 'Mechs can make physical attacks in a number of ways. They can use one or both arm actuators to punch an opponent, or both arms to push them over, or kick an opponent with one of their legs. If equipped with hand actuators a 'Mech can also pick up another physical object and use it as a club against a opponent. If a 'Mech can build up enough speed it can charge into an opponent, using its entire mass to deliver potentially devastating damage (though likely receiving some injury in return). Finally, 'Mechs equipped with jump jets can perform aerial attacks such as a Jump-Kick or Death from Above.[1][2]

Prior to the 31st century, few 'Mechs were designed specifically with melee combat in mind; if a 'Mech were to pick up something to use as a club, it was just as likely to be one of its own limbs which had been blown off.[1] The first 'Mech to be purpose-built for melee combat was the Hatchetman, introduced in 3023, wielding a giant 'Mech-sized Hatchet.[3] In the years since then many different types of Melee Weapons have been introduced, as have a number of melee-focused BattleMechs.