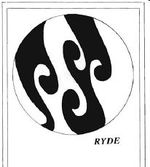 The planet Ryde suffers from a slightly elongated orbit as a result of the powerful gravitational pull exerted on it by the three large gas giants within the system. Still undergoing tectonic upheaval arising from the stresses under which the planet was formed, Ryde is a world of long, harsh winters and the majority of the continents on the planet are covered with snow and ice that only melts when local tectonic activities causes volcanoes and geysers to erupt. Ryde has seven major continents; three of these are in the northern hemisphere and four in the south. Of the northern continents of Breight, Larnea and Lesser Dasentica only Lesser Dasentica is calm and warm enough to support major urban settlements. The same is true of the southern continents of Greater Dasentica and Kale, while Creos and Roschi are similarly snow and ice-locked.[2]

The largest bodies of water on Ryde are the three seas; each of these seas is tinted yellow by the sulfur that erupts from geysers in their depths and each is steaming hot. The combination of sulfur and an abundance of heavy metals in the water renders the water unsafe to use.[1][2]

The eruptions and earthquakes that are common to all the continents of Ryde had less of an impact on Lesser and Greater Dasentica and Kale, and it was these continents that were settled by the early colonists.[2] The early settlers were able to take advantage of the relatively safe access to an abundance of geothermal enery, and easy access to minerals led to the population developing a very profitable chemical industry.[1][2]

The tainted nature of the seas on Ryde made using the water impossible for the early inhabitants of Ryde, and as a result the planet was heavily dependent on imported water brought via ice ships and the like.[2] The colonists perservered with settling Ryde despite the planet's hellish appearance, and founded the city of Heaven's Gate on one of the more stable continents; their perservance also revealed that the rich volcanic soil proved capable of growing enough food to sustain a large population.[1]

In May 2237 Ryde joined the worlds of Freedom and Sevren in declaring independence from the Terran Alliance; as a result, Admiral Leondard Juillard and General Armando Luchesi of the 2nd Interstellar Strategic Combined Assault Force or INTERSTRATCAF dispatched three squadrons of vessels to put down the rebellion; one of these squadrons travelled to Sevren, and consisted of attack transports, assault carriers and some KF-equipped strike cruisers. The INTERSTRATCAF squadrons had been on exercise near Saturn, and as a result were able to reach the Sevren system in just three days.[41]

Once in the Ryde system the INTERSTRATCAF squadron proceeded to implement the plan assigned to it by Admiral Juillard and General Luchesi; the squadron blockaded the zenith and nadir jump points, deployed marine detachments on Sevren to impose martial law, replaced civilian leaders with military officers as the local commanders saw fit, and attempted to limit the ability of the seditious local populace to obtain or use weapons by detaining anyone found carrying such a weapon.[41]

The local population on Ryde reacted in a pattern that would soon become familiar to the Terran marines on many worlds as news of the rebellion was carried at considerable risk by blockade runners from world to world; many civilians retreated into the wilderness, and using weapons as primitive as staves and swords began an insurgency that used extensive guerrilla tactics against the Terran Alliance forces. The marines controlled the cities, but were hampered by rules of engagement intended to preserve the colony and prevented them from conducting active genocide or using weapons of mass destruction. The knowledge possessed by the locals of the terrain gave them a huge advantage outside the cities, and guerrillas frequently attacked military units travelling between settlements. Aided covertly by the crews of the iceships operated by the Ryan Cartel, the rebellion outlasted the will of the Alliance government to fight an insurgency across fifty worlds. Alliance forces and the Alliance government abandoned Ryde, leaving the world independent, along with the vast majority of the other settled worlds in the Inner Sphere.[5]

The problems with obtaining fresh water on Ryde made it an attractive proposition for the corporation Water Pure Industries, which was based on the nearby world of Corridan IV. The chemical industry present on Ryde was an added incentive and Water Pure Industries established a Water Pure facility on the planet, a massive purification plant located near Heaven's Gate, the planetary capital, which was located on Kale. For centuries afterwards the massive reservoirs constructed near Heaven's Gate to catch water from the annual snowmelts fed water into the Water Pure facility which operated continously, cleansing the water the population was dependent upon.[2]

The Draconis Combine raided or attacked Ryde repeatedly, attacking both the Water Pure facility and attempting to capture the chemical industry on the planet and with it the associated products manufactured on-world, products which range from specialised pharmaceutical and fuels to industrial-grade explosions. Ryde was equally significant to the Lyran Commonwealth, which seeded numerous small armed outposts near the major cities.[2]

During the darkest days of the Second Succession War the Lyran Commonwealth was losing worlds steadily to both the Draconis Combine and the Free Worlds League, and the Lyran Commonwealth Armed Forces neared the point of collapse, particularly in the 2860s and 2870s. As the 2870s drew to a close the LCAF regained some of its confidence and launched a number of attempts to recapture some of the worlds that had been lost to the Commonwealth's neighbours, but still couldn't keep pace with the rate at which worlds were being captured. The Combine continued to push towards the important world of Skye, and by 2884 Ryde had been captured along with the worlds of Balkan, Kessel, Port Moseby, Skondia and Vega and the Draconis Combine Mustered Soldiery was on the verge of being able to threaten Skye directly.[12]

The Commonwealth began the groundwork for recapturing Ryde from the Combine during the reign of Archon Eric Steiner; dubbed Operation FREEDOM, the LCAF began a military campaign in February 2913 led personally by the Archon which was focussed on recapturing worlds. The first wave of targets for Operation FREEDOM consisted of the worlds of Freedom, Ryde and Dalkeith, although the Operation nearly came to a precipitous end when the Archon was killed on Freedom.[13]

By the end of the Third Succession War Ryde was the administrative capital of one of the three LCAF theatres of operation on the border between the Commonwealth and the Combine.[42] Despite the numerous raids and attacks against Ryde and the period of Combine occupation the Water Pure facilities on Ryde were still operating, making Ryde one of three worlds with active Water Pure manufacturing plants, although the facilities on both Ryde and Freedom were both significantly smaller than the main production facility on the world of Corridan IV.[43]

Ryde was incorporated into the Republic of the Sphere after the Jihad; the Republic left the majority of the defensive outposts located on Ryde in place, although the majority of the outposts were stripped of their armaments and left to stand as monuments to the history of the planet.[2] Ryde was captured by Clan Jade Falcon in June of 3134, as Malvina Hazen began unleashing her Mongol attacks on the Inner Sphere.[44] One of the first Republic of the Sphere worlds to be attacked by Malvina, the Jade Falcon occupation of Ryde saw seven thousand citizens rounded up and executed in a public display to quell any thoughts of resistance among the population.[45] The Republic Armed Forces were stretched thinly enough that about the only defenders available against the Jade Falcons when they attacked Ryde were the Stormhammers, a separatist faction led by Jasek Kelswa-Steiner and intent on seeing former Lyran worlds reincorporated into the Commonwealth.[46]