Scorched Earth was a World Wide Event created by the Catalyst Demo Team. It consisted of boardgame and roleplaying scenarios that were played out in a worldwide series of events under the supervision of the Agents during the Summer of 2017. The scenario packs were subsequently made available for free download in PDF format, as two separate files. One file covered classic BattleTech (boardgame) and Alpha Strike scenarios while the other covered the accompanying roleplaying scenario for the A Time of War ruleset.

This is was first World Wide Scenario produced for Battletech since Operation Kabutomushi in 2008 ("Historical Events" in the following years notwithstanding). 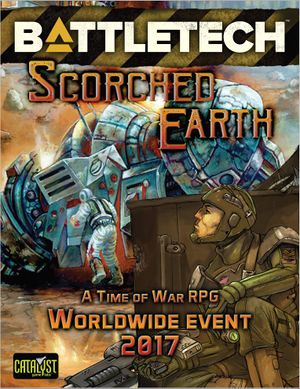 "Catalyst did not endorse this project nor were they ever asked to do so. They had no hand in creating, promoting, or distributing it. This was done, 100%, by the Demo Team with no expectations, whatsoever, that this would be canon. All the work you see put into it was done by volunteers, either demo team members or red/yellow/green beemers who volunteered to work on this outside of any official capacity with Catalyst."[1]

Through the Catalyst Demo Team, they have an outside claim to being apocryphal at best and in any case do not fall under the current definition of Canon for the BattleTech universe.

The scenarios depict the invasion of the Free Rasalhague Republic world of New Oslo in July 3050 during the Clan Invasion, pitting the FFR's New Oslo Militia and the GKT Volunteer Regiment against elements of Epsilon Galaxy (Clan Wolf) in a fight over the site of the Gorton, Kingsley & Thorpe (GKT) Enterprises factory complex, specifically the city of Lilihammer, gateway to the Ringsaker valley and the GKT factory. Under snowy weather conditions, the FRR forces attempt to buy time for their technicians to disassemble (or scuttle) the factory before Clan Wolf can seize this prize.

The first scenario was written for regular BattleTech boardgame play, the second for Alpha Strike.

The roleplaying game component (written for A Time of War) includes several encounters a Game Master can run their players through. The scenario can be run from either the perspective of the Free Rasalhague Republic or Clan Wolf. Included with this PDF is a number of character & non-player character templates already filled out for the Game Master's use.