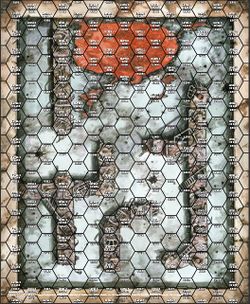 A converted junkyard in the Burgton area of Solaris City (collectively known as The Reaches) on Solaris VII, the Class 5 Scrapyard is a claustrophobic debris filled maze.[1][2] [3]

Thanks to both its size and the never-ending BattleMech duels, Solaris City produces an immense volume of industrial waste. For centuries the larger pieces of industrial refuse was shipped on barges from Solaris City to North Pier for disposal, with the remainder dumped into what was known locally at the Scrapyard. A vast, eerie location until around 3045 when it was considered too full, with the city starting a new dump. Two former MechWarriors - the twins Tammy Fae and Bagera Rowsh - however saw an opportunity and used their earnings to purchase and convert the Scrapyard into a BattleMech arena, turning half of the massive junkyard into a hazardous maze of killing zones and acid pits. [1]

The Scrapyard was one of the few venues that was directly untouched by the Word of Blake Jihad, though sharper eyes will pick-out the odd bit of "Word of Blake white" among the debris and wreckage that makes up the arena.[3]

Referred to as a "grope-and-shoot" arena, combat in the Scrapyard can be a long drawn out affair as combatants stalk each other in the twisting maze, interspersed with sudden and close-range strikes. The Scrapyard is frequently altered and changed so even MechWarriors who fight regularly can be confused as to its layout. The Scrapyard's maze like walls are shorter than the arena's five stories tall outer boundary, consisting of thick embankments of industrial parts and waste, capped with dirty and lazer cut to create sharply defined shapes. The sheer volume of military grade metals and the thickness ensure the walls easily block sensors and hamper missile locks - even Active Probes are rendered useless. [1] [2] [3]

Both opponents begin matches from one of three randomly assigned gates at two entry points on the right side of the arena. Tammy Fae Rowsh reportedly rolls a six sided die to determine these positions, which are kept hidden from the competitors until the match begins. On a few occasions opponents have found themselves emerging from adjacent alcoves resulting in desperate pointblank slugging matches, but generally fighters are more separated. [1] [2] [3]

In some areas of the Scrapyard the passageways are very tight with much protruding material, slowing even a skilled MechWarrior and providing an effective ambush point. Many a match is decided by which competitor can think on their feet and utilize such points to ambush an unwary opponent. Resourceful combatants over the years have also discovered that the walls offer up a myriad of improvised weaponry after being suitably "softened up", with 'Mechs equipped with two hands often catching their opponents unawares with hurled metal or battered with makeshift clubs. [1] [2] [3]

The southern portion of the Scrapyard is considered the most hazardous, with several pools of toxic waste and acid, remnants of the Scrapyard's origins, dotted throughout this section. These noxious pools can quickly dissolve even BattleMechs, with four unlucky MechWarriors killed in recent years after stumbling into one of them, with many inexperienced MechWarrior outright opting to avoid the southern portion of the arena rather than make a potentially fatal piloting error. Even experienced pilots have much to fear, for as with much of the Scrapyard's ever changing layout, the Rowshes frequently obscure the acid pits with thin metal frameworks as well, a practice that directly contributed to at least two of those deaths to the acid pits. [1] [2] [3]

The Scrapyard has total seating capacity of 6,000 - 1,000 in box seats, with the remainder in general seating. The seating is contained within eight arching towers underneath the dome that lean slightly over the out arena walls, the box seats located within the two highest decks in each tower with the general seating occupying the remaining decks. The tower supports also feature banks of lights for dramatic night matches, with a high dome of sheet metal serving to keep most of the Solaris rain out. Admission pricing is much less than the arenas of Solaris City - 51 C-Bills for box seating, 17 C-Bills for general seating.[1]