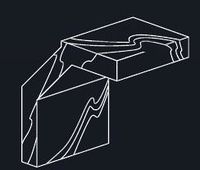 Developed in 3063 by the Capellan Confederation[1], Stealth Armor is a modern day equivalent of the Star League era Null Signature System. Stealth Armor has been used on battle armor and combat vehicles as well.

The finest achievement in stealth systems developed by the original Star League, the Null Signature System was capable of shielding a BattleMech from electronic detection. Unfortunately like many pieces of advanced technology, the system and the 'Mechs that carried it became LosTech during the maelstrom of the early Succession Wars. All Successor States attempted to recover and rediscover the technology, but the Capellan Confederation is the closest to recreating the system.

Discovering detailed information on the system in the archives of the reactivated Star League era Shengli Arms factory, while not yet able to produce a bolt for bolt, circuit for circuit replication, with typical Capellan ingenuity House Liao developed a stop-gap solution suitable for mass-production. Integrating the heat baffles and required components directly into specially designed armor plating, when linked with a Guardian ECM Suite Stealth Armor replicates the benefits (and disadvantages) of the Null Signature System. [2] Though bulkier than the Null Signature System that inspired it, Stealth Armor is still less bulky than Ferro-Fibrous Armor.[3]

By 3071, schematics for the armor had been stolen by the Federated Suns.[4] By 3075, the armor was also being manufactured by the Lyran Alliance, and possibly other powers as well.[5]

The Guardian ECM Suite mounted on the unit does not function with the armor activated, but the 'Mech suffers as if it were in an ECM field. With the Armor disabled, the ECM will function normally.[6]

BattleMech Stealth Armor provides as much protection as standard armor. It takes up two critical slots in each arm, leg, and side torso. To work, it also requires the 'Mech to carry a Guardian ECM Suite.[1]

The system can be activated or deactivated in the End Phase of any turn. When active the system builds up 10 heat points, and is affected as if it is in range of an enemy ECM Suite. Any unit attacking a BattleMech with active Stealth Armor gets a +1 hit penalty at medium range and a +2 hit penalty at long range. The Stealth Armored BattleMech cannot be a secondary target while the system is active.[6]

Instead of using a dedicated ECM Suite to provide the stealth capabilities, the Stealth Armor used on battle armor is essentially a scaled up version of the sneak suits long used by special forces and intelligence agencies. Engineers were able to incorporate the small IR and ECM baffling systems directly into the armor, eliminating the need for a dedicated ECM Suite.

As it renders the user invisible to all active probes[7], Stealth Armor is particularly popular with battle armor operators who are specialists in ambushing and infiltration. Only the experimental Bloodhound Active Probe can detect units using Stealth Armor.[8]

There are four types of stealth armor for battle armored infantry:

Prototype Stealth Armor
In 3050 the Federated Commonwealth introduced their prototype stealth armor on the Infiltrator.[9] Though effective, it was heavy and bulky.
Basic Stealth Armor
Engineers in the Draconis Combine took the prototype stealth armor and reduced its size and weight. By 3052 they had armor that provided as much stealth capability as the prototype ready for production.[9] The Clans also have the technology to make this armor, but they have only done so occasionally.
Standard Stealth Armor
After creating the basic stealth armor, the Combine engineers received several Nighthawk power armor suits. This allowed them to improve the stealth armor performance at a minor gain in weight and bulk. Entering production in 3053 this armor's balance of protection, weight, and size set the standard for battle suit stealth armor across the Inner Sphere.[9]
Improved Stealth Armor
Introduced on the Achileus suit, Improved Stealth Armor was a joint project between the Free Worlds League and the Word of Blake. The armor began production in 3057. It is even more effective than standard stealth armor, but it is much bulkier. Several rumors of this armor and its capabilities made their way to the Clans, who developed their own version in 3058.

Two years after introducing their BattleMech Stealth Armor, the Capellan Confederation began experimenting with stealth armor for combat vehicles. In 3067 the armor reached the experimental stage.[11] Bizarrely, it has only been seen in widespread use on the Word of Blake's Bolla Stealth Tank[12], though it can be fitted to any vehicle or AeroSpace Fighter. By 3084 advances in armor production for the Inner Sphere would allow this class of Stealth armor to enter limited mass-production and would re-rated as Advanced Technology.[13]

Vehicular Stealth Armor functions in the same way as the BattleMech version. It requires an ECM Suite and enough heat sinks to dissipate the 10 heat points generated each turn it's active, but fusion engines and power amplifiers are not required on combat vehicles or conventional fighters.[11] Vehicular Stealth Armor takes up two equipment slots on combat vehicles, support vehicles, and AeroSpace Fighters.[14]