The Mark 39 Voidseeker Attack Drone is an automated defense system of the SLDF based on the (then experimental) F-90 Stingray aerospace fighter. Designed to work in conjunction with the much larger M-5 Caspar SDS drone warships, the Mark 39 is capable of engaging fighter sized targets which the Caspars are unable to target with their naval size armament. 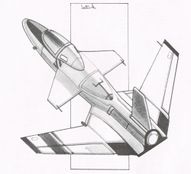 The Voidseeker replaced the Mark 30 BlackWasp drone fighter and it can be speculated that, like the BlackWasp, the Mark 39 could be launched from the Caspar drones or carrier satellites. The Mark 39 is noted for having superior resistance to electronic warfare gear, compared to its predecessor.

The most notable feature about the Mark 39 is that their sophisticated battle computers are capable of coordinating attacks with other Mark 39 and M-5 units by forming a decentralized computer network, which allows the drones to collectively make tactical decisions. The advantages include preventing overcommitting drones against a single target, and the impossibility of neutralizing the defenders by taking out any central command unit. The Mark 39 drones could also be slaved to a human controller.

After the initial Voidseeker design was created and deemed successful, engineers created two versions: The MK 39-004 Interceptor and the MK 39-007 Striker.[1]

The Mark 39 family was very successful and deployed in vast numbers (by the thousands) in areas that did not warrant the deployment of M-5 Caspars, such as deep space naval installations like Camelot Command and planetary systems of minor value. Most of the Mark 39 systems had been destroyed, deactivated or otherwise neutralized by the end of the Second Succession War but some can still found in active service.

Like land mines, the Mark 39 drones maintain a passive listening mode and respond to all ships that fail to provide a correct IFF transponder code.