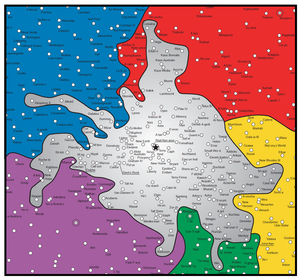 Word of Blake Protectorate in 3072

The realm was created on the 18th of February 3066 by the five Chaos March worlds of Caph, Keid, New Home, Bryant and Epsilon Eridani that banded together under the protection of Terra and the Word of Blake. [1][2]

End of the Second Star League and Start of the JihadEdit

In November, 3067 the Fourth Whitting Conference ended in disaster for the Word of Blake. Having being nominated a provisional with the Taurian Concordat, it was unable keep the various leadership of the Inner Sphere Great Houses to sustain the League.

The Protectorate forces then carried out crippling attacks on a number of Periphery and Great House capital worlds with WarShips and other devastating means. These attacks crippled or hampered Succession States from acting to counter Blakist moves to expand the Protectorate. These attacks were announced as means attempt to reconvene the Star League Council to restore 2nd Star League from disbandment.[3] Word of Blake also conducted a "White-Out" of the HPG Network using viruses and other means of disrupting the Inner Sphere's means to communicate from world to world.[4]

After the start of the Jihad the Protectorate's borders expanded rapidly, mostly by taking worlds that were once part of the Terran Hegemony. The "White-Out" provided disruptive cover for Blakist frontline Divisions to seize worlds.[5] Having unknown military Divisions of their regular Militia forces and more elusive forces belonging to its Shadow Division conduct black op attacks in trouble spots.

The Word of Blake took worlds from the Chaos March, the Draconis Combine's Dieron Military District, the Freedom Theater and Skye Province of the Lyran Commonwealth, and parts of the Free Worlds League.

After Devlin Stone and his allies defeated the Word of Blake, most Protectorate worlds became part of the Republic of the Sphere.[citation needed]

Initially, the Protectorate's military forces consisted of only 10 Divisions of Militia forces. These units, made up of ComStar defectors, consisted of the bulk of their force.

However, the Jihad revealed the Blakists had a much larger army. Structured in three tiers, the units consisted of regular units, local defenders and elite units.[6] However, the Word of Blake forces leadership was divided. The Regular Militia and Protectorate were under the direct command of Precentor Martial Cameron St. Jamais, while its elite forces were under the command of Precentor Apollyon.

The Protectorate's military forces operate in what are known as Military Command Theaters. These theaters are spread out and cover the entire Inner Sphere and the near-Periphery. While having a dedicate command for Protectorate, other Theaters are dedicate offensive actions within respective areas of responsibility.[7]

The other Military Commands include;

Three Military Formations of the Word of the BlakeEdit

Systems of the Word of Blake ProtectorateEdit

As of 3072 the following systems were part of the Word of Blake Protectorate:[17]