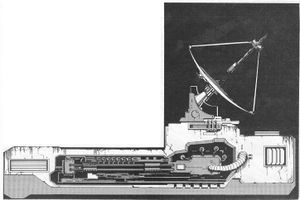 A HyperPulse Generator (HPG) is a variant of K-F drive technology based on an obscure speculation by Kearny and Fuchida that it might be possible to create artificial jump points. This proved correct, but the energy costs were such that it was not possible to send a ship through. Instead, the effect was harnessed to transmit electromagnetic signals - communications.

Messages sent via ComStar and the Word of Blake are charged on per-transmission basis, dependent on how many stations the message must traverse to reach its destination, for example 1 milisecond message worth 1 C-Bill that must travel via 15 stations would have final cost of 15 C-Bills. Priority messages however are almost prohibitively expensive, an identical 1 milisecond message sent on a priority basis would be in the range of a 1,000 C-bills per station, with the station of origin also asking for a upfront 5,000 C-Bill for interrupting the normal message schedule. [2]

With their faith in ComStar's neutrality finally shattered by the actions of Operation Scorpion in 3052, the Great Houses seized control of the HPG stations within their realms. However, initially lacking the ability to run the network they employed the now secular ComStar to do so on their behalf, though the Free Worlds League chose to allow the splinter Word of Blake faction control of the FWL HPG stations. As HPG technology slowly began to disseminate to the states of the Inner Sphere, despite the significant differences between ComStar and the Blakists, the HPG network ran relatively smoothly save for occasional instances Blakists propaganda inserted into messages and their eventual seizure of Terra.

This changed when as part of their Jihad against the Inner Sphere, the Word of Blake instigated a "white-out" in 3068, flooding the HPG grid with white noise, everything ranging between Blakist propaganda to utter gibberish, backing up transmissions for months and creating chaos that distracted their enemies from the Word's activities. After the Blakists were defeated, the HPG network returned to normal operation under ComStar and formed the cornerstone of the Republic of the Sphere, as it did the Star League before it.

However in 3132 attacks perpetrated by an unknown agent or agents disabled the HPG grid. roughly 75% of the Inner Sphere's hyperpulse generators were nearly simultaneously destroyed, crippled, or in some other way damaged. Approximately 80% of the A circuit and a large portion of the B circuit were rendered inoperable by a computer virus which used a message cascade to burn out the HPG's transmission core. HPGs with components immune to this virus were attacked by forces unknown. It is unknown why or by whom this was done, but the actions crippled communications. Many important messages are now relayed via "pony express" DropShips to planets without a working HPG. Much like water resources and working factories in the Succession War era, planets with a working HPG have become much more important and vital military targets.