Difference between revisions of "Katana Tormark"

Katana Tormark (3102 – 3???) is the former Prefect of The Republic of the Sphere's Prefecture III and Duchess of Proserpina. She became the leader of the splinter faction known as the Dragon's Fury and, after her defection to the Draconis Combine, Warlord of the Dieron Military District.

Katana Tormark was born in 3102 on Ancha as daughter to Akira Tormark and Rachel Jefferson. Due to her father's heritage and her mother's affection for all things Japanese, the girl was raised in accordance to Combine traditions in spite of growing up on a Republic world. Her life changed drastically when, at age eight, she witnessed her father behead her uncle Kan Otome as part of an ISF-sanctioned execution. The deep-cover agent subsequently withdrew from the family he had started, leaving Katana with her mother.

Rachel Jefferson was a known musicologist and expert at playing the shakuhachi. In the years following Akira's disappearance, she received a number of invitations to perform on Combine worlds, always taking her daughter with her. In 3113, the two visited Oniji Otome, Kan's brother, to return his swords. Seeing the manner of her upbringing mirrored by an actual Combine world had a tremendous impact on the young girl's perception and instilled her with a sense of belonging that would later become a key factor in the cause of her defection.

At age ten, Katana volunteered time at a local counseling center, helping immigrant children and young teens from the Combine who had trouble adapting to life in The Republic. This dedication did not go unnoticed, and in 3116 the girl was awarded Republic citizenship, a year earlier than the usual required period.

In 3117, Akira Tormark returned to take Katana in after her mother's death in a hovercar accident, but failed to reestablish a connection with his daughter, who spent more and more time in the Combine, visiting Oniji and studying bushido. When Katana turned fifteen, she left her father, convinced that she could take care of herself. By her sixteenth birthday, she had gained special dispensation to carry daisho, the traditional swords of the samurai, on Ancha.[1][2]

Service to the Republic[edit] 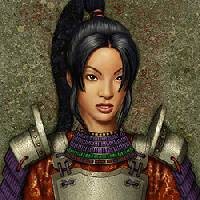 Duchess Katana
In 3119, fate brought Katana Tormark to meet Sir Reginald Eriksson when the latter was forced to defend himself against local criminals. Being chased into a local gym, the Republic Knight was forced to shoot two of his attackers, but also found unexpected help in the form of Tormark and her daisho swords. Eriksson stayed on Ancha to interview the young woman and, in light of her previous involvement in community service, sponsored Tormark for a service career in the Republic Armed Forces. She graduated from Northwind's academy in 3122, but opted to extend her stay in a training position, leading her cadet corps dubbed Dragon's Fury to academy honors in three consecutive years. It was during these years that she also made the acquaintance of then-cadet Tara Campbell.

Promoted into active service in 3124, Tormark found herself in a military that was engaged in more parades and 'Mech-smuggling investigations than actual combat, but managed to inspire a sense of loyalty and self-worth among her troops rarely found in untested warriors. In 3126, Major Tormark was disciplined for using "non-standard training techniques" on Ozawa base, but reports of this incident are sketchy and no mark was made in her personal file. She was promoted to the rank of Lieutenant Colonel in 3127, after leading the Black Lancers Brigade against a pirate force attacking the world of David, an action which also saw her awarded with the bronze cluster for courage in the face of the enemy.

The Paladins of the Republic convened in 3128 to select a new Prefect for Prefecture III, and Tormark was invited to Terra to be interviewed together with Countess Tara Campbell. Citing a lack of experience, Campbell declined the post in Katana's favor, and Tormark was raised to the position of Prefect, a Prefecture's military leader. Scaling back her visits into Combine space to an annual pilgrimage, she invested a great deal of energy into her new position, determined to forge the military forces at her disposal into a well-drilled fighting force to better defend the people of Prefecture III.[2][3] On the 18th of June 3132 Katana refused the offer of a Knighthood from the Republic.[4]

The Fury of the Dragon[edit]

On August 7th 3132, the Inner Sphere was plunged into a new Dark Age as large parts of the HPG network were sabotaged, crippling the established means of communications throughout the galaxy. The resulting chaos and the unknown identity of the perpetrators culminated in social unrest, exposing the fragile nature of Republic unity. Among the many people left disillusioned by these events was Katana Tormark, who began to think of the long-established Draconis Combine as a guarantor of stability.

Resigning from the position of Prefect before her five-year-term ran out and turning down the knighthood offered to her by the Republic, Tormark instead retreated to Proserpina, where she began to build a splinter faction by secretly recruiting likeminded individuals and military units loyal to her command with the eventual goal of returning traditionally Draconian worlds to the Combine. In remembrance of her academy days, Tormark named this group the Dragon's Fury.[5]

Although a powerful force built around the elite Amaterasu regiment, the subsequent campaign failed to garner open endorsement from Coordinator Vincent Kurita, the unexpected lack of any kind of response - be it approval or condemnation - greatly troubling the group and being a cause for ongoing concern and arguments between Tormark and her most trusted companions during a number of briefings.

Cut off from Republic supply lines and being denied support from the Combine, the Fury soon saw itself strained to the limits and struggling to hold on to the worlds they captured. Still resolved to see her vision through, Tai-sho Tormark worked hard to increase recruitment from among the population of the planets the Fury had liberated, using carefully orchestrated propaganda and her own charisma to sway public opinion and appeal to the people's Draconian heritage. The civilians and militia troops pledging their loyalty to the Fury quickly came to form the bulk of its forces, the regiment simply being called The Brotherhood in an effort to appeal to the unifying force of its members' alleged Combine blood - a heritage fabricated by Katana by cobbling together bits and pieces from half a dozen real DCMS regiments.[6]

In 3134, Tai-shu Mitsura Sakamoto began his own series of unauthorized raids into Republic space, eventually coming into conflict with the Fury whose leader he deemed an obstacle to his ambitions. Dreading to fight fellow Combine warriors, Tormark ordered her forces to "pull their punches", establishing a doctrine where the Fury would fire a few halfhearted volleys before withdrawing, refusing to stand their ground against their kindred. As Sakamoto's soldiers began to take notice and develop an unexpected respect for their foe, the Warlord commanded his units to shoot to kill. An aerospace bombing run on retreating units of the Fury ultimately resulted in the death of Chu-sa Antonia Chinn, Tormark's lover.

Pushed to the brink and facing rising pressure from Sakamoto's forces, Tormark finally resolved to confront the Warlord, utilizing a hidden ace in the form of 'Mechs and materiel as well as soldiers and even a few Black Boxes her agents had only recently acquired through careful negotiation with yakuza descendants of the dissolved Ghost Regiments. Tormark never faced her nemesis in battle and was denied the satisfaction of revenge, however, as the Warlord - poisoned by a third party - failed to control his 'Mech during a combat drop, crashing the No-Dachi into Saffel's ocean. Sakamoto's second-in-command, Tai-sho Carol Worridge, reacted to Tormark's arrival on the battlefield by ordering the immediate cessation of hostilities and offering to join the Dragon's Fury.[1]

On November 30th 3135, Katana was appointed the Warlord of the Dieron Military District and tasked with securing the planet Dieron and other territories for the Draconis Combine.

Tormark secured the aid of Clan Nova Cat forces. In her efforts to secure the Nova Cat aid however, she gave Khan Jacali Nostra of the Nova Cats a document that both seemed to shock the Khan, and fill her with some vague hope. As to what was in the document was not disclosed, but the Nova Cats did attach to Tormark's forces a Galaxy of Warriors. Tormark was eventually successful in taking Dieron, fulfilling the District with its namesake Capital.

Katana, by his near connection with the Nova Cats, sided with them and Emi Kurita in the Draconis Combine Civil War, in 3143. She had choosen the wrong side: only Katana's forces and the Cats join Emi. The Nova Cats were annihilated, and Toranaga concentrated their forces against Katana's people, who continued in rebellion until was defeated in March and taken prisoner, imprisoned on Luthien.[7] Katana's destiny was unknown, only than she had been imprisoned and expected to be executed. This may have happened in secret to avoid making her a martyr.[8]

Katana Tormark is the second cousin of Governor Reinaldo Tormark and a direct descendant of Fuhito Tetsuhara.[9][2]
Tormark was in a relationship with Chu-sa Antonia "Toni" Chinn, a MechWarrior from her Amaterasu regiment some time prior of her death.[10]

As heir to the Tetsuhara clan, Tormark inherited the katana once gifted by Coordinator Miyogi Kurita to Jackson Hayes in 2865. This legendary weapon, its 69cm blade still flawless even after the passing of almost three centuries, was also carried into battle by Minobu Tetsuhara, revered as having been one of the greatest samurai of his generation.[11]

Tormark is in possession of the PNT-9R Panther Katana Kat, an heirloom 'Mech once piloted by Minobu Tetsuhara. During her campaign as leader of the Dragon's Fury, she instead fights in a BattleMaster or the NX-23L Nyx Kolyu, loaning the Panther to Brotherhood MechWarrior Abeda Measho. After assuming command of the Dieron Military District, her vehicle of choice becomes the HK-P Hitotsune Kozo Kuro Ha.[1][12][13]

Although some artist renditions show Katana Tormark as a woman with a comparatively light complexion, the character is noted to have "milk chocolate" or "chocolate-brown skin" in the novels, perhaps fitting given her African-Asian heritage.[1][5]

The name of Katana's BattleMaster, Kolyu, has no actual meaning. This is most likely a mistaken spelling of Koryu, which would mean "old school" - a reference to pre-Meiji restoration martial arts, but generally fitting to a warrior who adores traditional Japanese feudal culture.