Difference between revisions of "Liam Ismiril"

The events surrounding the breakup of saKhan Liam Ismiril and Clan Nova Cat Khan Sandra Rosse would one day lead to the bitter feud between the two Clans, ending only with Clan Smoke Jaguar's Annihilation.

Assigned to take the planet Eden along with three other Clans during Operation KLONDIKE, saKhan Ismiril would aid Khan Franklin Osis in every way he could. This often included commanding the brutalization of unruly populations, with reports of torture and rape by Smoke Jaguar warriors being heard from survivors of Smoke Jaguar attacks. Though ilKhan Nicholas Kerensky was furious with the Jaguars for their wretched treatment of civilians and wanton destruction of infrastructure, he would keep his anger in check for the sake of his campaign of conquest. However, the ilKhan still kept a tighter reign on them until the end of hostilities, not wishing to engender any more resistance in Eden's populace.[2] 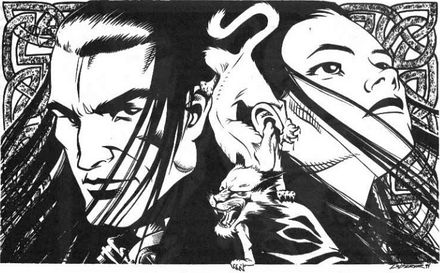 War of the Cats

Some time soon after the Pentagon Worlds had been pacified, saKhan Liam Ismiril would gain the attentions of the young, vivacious Nova Cat Khan, Sandra Rosse. The two would spend a great deal of time with each other in a short but intense relationship. Though initially the vast difference in their respective Clans' ideologies and practices went overlooked, Rosse would suddenly find them insurmountable, ending the relationship without warning. The furiously distraught saKhan Ismiril was not one to let it go simply on her terms. A week after her decision, a Nova Cat Clan Council member died during a suspicious accident that involved a malfunctioning 'Mech. And in a crude and animalistic gesture of malicious spite, a dead nova cat was placed inside an iron womb in a Nova Cat birthing facility. The symbolism of vendetta was unmistakably clear to the young Khan and her Clan.[3]

The founder of the Ismiril Bloodname House, Liam Ismiril would add to the brutal legacy of his Clan during his life, and his genes would produce offspring to further the cause long after his death. But overshadowing even this, the bitterness he felt at Sandra Rosse's rejection became the impetus for a feud that did last well over two centuries.[3]