The Raider was an unusual Experimental Medium Class BattleMech, which was the brain child of a Republician Industrialist named Jacob Bannson. The design was created as a means to skirt around Republic of the Sphere restrictions on military hardware under the project name "Jacob's Ladder". Bannson's technical and engineering teams would utilize whatever technology they could access to reach their goal. By 3132, weapon systems and hardware began to come together, however the power plant would prove to be Bannson's engineers biggest obstacle. Two years worth of failures would delay the Raider's production at Bannson's two factories on Tybalt and St. Andre. However, despite these engineering setbacks, the resulting design turned out to be not necessarily a failure. The Raider proved to be a commercial success when it first appeared on the battlefields by 3134. The design's most noted usage would be through Jacob Bannson's personal mercenary force, the Bannson's Raiders.[4]

The Raider is an ICE-Powered BattleMech, while its internal construction is similar to contemporaries of its tonnage. Its 200-Rated Internal Combustion Engine gives the 'Mech a modest maximum speed of 64 kph. However if the MechWarrior piloting it is able to manage the 'Mech's heat output correctly, they should be able to engage the Raider's military grade Triple Strength Myomer to move the Raider to a faster top speed and become more effective in close range combat. To help it survive the rigors of the battlefield, the Bannson Universal Research & Development team was able to develop its own standard grade BattleMech armor for the company's use. These engineers fitted out the Raider with 7 tons of this armor to give the Raider protection most industrial 'Mechs would envy.

Its arsenal of weaponry is limited to a pair of Hatchett-Dauer Quarrel 10-Tubed Medium-Ranged Missile Launchers mounted in the right torso, with single ton of ammunition. The Raider's primary close-range weapon is its BUU SuperCutter Dual Saw mounted on its left arm actuator.[5] 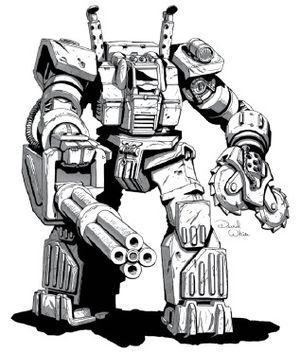 The JL-1 Raider has the following Design Quirk;

The JL-2 Raider Mk.II is subjected to the following Design Quirks;