The Day After is a short story by Jason Schmetzer that was published online on BattleCorps on 23 February 2007. It was also published in print in the fourth BattleCorps anthology, Fire for Effect, in 2013. 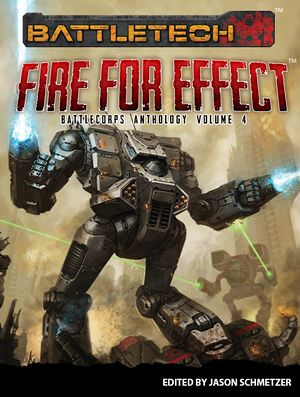 Kari Marita's Thug steps on the cockpit of Lieutenant Grape's Loki, with Stacy Church's Mad Cat in the background; cover of the Fire for Effect anthology

Determined to show that Wolf's Dragoons still exist, Maeve Wolf reconstitutes the Black Widow Company, with Stacy Church as the new Black Widow. Church is hesitant to accept the mantle of Natasha Kerensky's immense legacy, recalling how her trinary was destroyed in the scouring of Outreach when the Broadsword Legion mercenaries betrayed them and turned against them all of a sudden. Church herself pressed on, but ultimately only survived because Maeve Wolf and other Dragoons came to her aid in time.