"Most armies use their BattleMech resources sparingly when they can, and so maintain forces of Combat Vehicles to serve in low-intensity conflicts and as auxiliaries to BattleMech units. Like BattleMechs, vehicles can be constructed as modular OmniVehicles. Vehicles are classified by weight in the same manner as BattleMechs, and also by type of locomotion."[1] 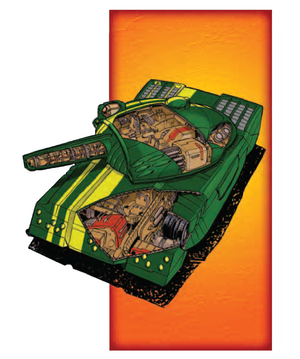 "Light vehicles have a maximum weight of 35 tons. Primarily used for reconnaissance, the light vehicle is almost exclusively designed for speed. Though tracked and wheeled light vehicles exist on the battlefield, hovercraft —with their greater speeds— dominate this weight class."[1]

"Medium vehicles weigh from 36 to 55 tons. Used as skirmishers, medium vehicles are fielded by the various House militaries of the Inner Sphere to harass and pin down an enemy until heavier forces can be brought to bear."[1]

"Assault vehicles weigh from 76 to 100 tons. Though they lack the mobility of their ’Mech counterparts, the sheer volume of firepower that an assault vehicle carries can be the downfall of even a heavy ’Mech if the MechWarrior piloting it fails to exercise caution."[1]

Vehicles are also classified by their types of locomotion: