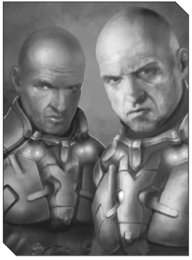 A native of the Rim Worlds Republic, Herve fought against Aleksandr Kerensky during both the Apollo campaign[1] and Operation Liberation[2], but became disillusioned with his leaders' politics and decided to join the Star League Defense Force. Following the war's end, Herve and Nigel chose to join Kerensky's Exodus from the Inner Sphere.

Herve's hopes for a fresh start were dashed as old prejudices against Rim Worlders were revived, and so he chose to follow Nicholas Kerensky during the Second Exodus to Strana Mechty. The younger Kerensky cared more for Herve's abilities and loyalty than for his past heritage, and Herve worked to repay this trust in full.[1] During the tests to determine who would remain in Kerensky's new military, Herve succeeded in retaining his position in the armed forces, and served as an academy instructor for both serving personnel and the newly demobilized.[3]

When the Clans were formed, Herve and Nigel's leadership skills and ability to work as a seamless whole led Kerensky to assign them as joint Khans of the newly-created Clan Burrock.[1] During Operation Klondike Herve ably led his Clan during the campaign on Dagda, and while Kerensky ultimately decided that Clans Wolf and Jade Falcon would carry out the final operation on that world, Clan Burrock had nonetheless lived up to his expectations, the only one of the Clans initially assigned to Dagda which had done so.[4]