Seppuku is a form of ritual suicide by disembowelment and a key element of bushido whereby a dishonored individual may attempt to regain some of their lost honor to committing suicide. Also called hara-kiri, seppuku is the preferred term. 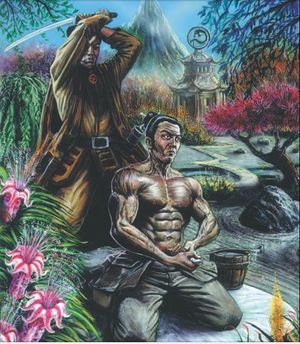 The ritual involved in seppuku is long and detailed. First, the individual is bathed and dressed in a white kimono. They are provided a favorite meal and following their repast are allowed time to compose a death poem.

At this time, the tanto, or knife, is presented. The individual opens their kimono and plunges the tanto into their bellies, making a left to right cut. At this moment, the individual's second, or kaishakunin who has been standing nearby with a katana, nearly severs the individual's head to prevent any pain from showing on the face, thereby preventing loss of honor and face.

Because of the requirement to leave just a small amount of flesh attaching the head to the body, only the most skilled swordsmen were selected as kaishakunin. It is both an honor and a concern to be selected as kaishakunin. The honor comes from being respected highly enough by the individual to perform the duty properly. But even if the duty is performed well, no honor is to be gained through the action, while immeasurable honor can be lost if it is performed badly.

In situations where a second is not available, the person committing seppuku is expected to make a second cut, from right-to-left. They are expected to bear their pain and suffering quietly while they perish from blood loss. This form of seppuku is called jūmonji-giri.

Seppuku is Japanese in origin and was widely used within the Draconis Combine to allow unsuccessful military commanders a chance to redeem themselves. As dishonor to one resulted in dishonor to the family, seppuku was a way of protecting the family of the dishonored.

Committing the act normally required the permission of a commanding officer or, for the highest military ranks, the Coordinator himself. It was also occasionally used as a punishment for failure in duty and commanders could order their subordinates to commit seppuku.