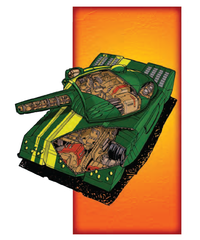 In many cases, combat vehicles can be just as powerful if not more so than their BattleMech counterparts. Combat vehicles are structurally weaker and, for some designs, not as maneuverable as 'Mechs; a tracked vehicle for example cannot negotiate dense woodland or deep waterways as well as a 'Mech. However they do use the same weapons, armor and technology as found on 'Mechs. Ground vehicles also benefit from the fact that they have a lower center of gravity and larger footprint than 'Mechs, allowing for more stability.[2] Though most are powered by an internal combustion engine and limited to ballistic or missile weaponry, this combined with advantages in their design allows them to shed waste heat more efficiently. Power Amplifiers allow for ICE-equipped vehicles to use lasers and other energy weapons; other vehicles are built with their own fusion engines, and are still cheaper to produce than 'Mechs.[3]

Tracked vehicles use loops of interlocking metal plates known as tracks. While not as fast as hover or wheeled vehicles, tracked vehicles have a very high weight capacity compared to other ground vehicles, allowing them to mount the heaviest weapons and armor.[7]

VTOL craft use directional jets or rotors to achieve flight, allowing for high speeds and maneuverability over any terrain simply by flying over it. These vehicles are akin to modern helicopters, and can hover in place at altitude. Their light weight, however, allows for limited armoring and their means of locomotion are particularly vulnerable to damage from weapons fire.[7]