This article is about the Archon of Lyran Commonwealth. For the Fox-class WarShip, see Robert Marsden (Vessel).

Robert Marsden (2351 — 2395[2]) was a military leader, leader of the Protectorate of Donegal, and Archon Basileus of the Lyran Commonwealth.

Robert was a decisive, practical and stubborn man who held a hatred for poorly run organizations. He was nicknamed "The Crusher" for his cold-blooded cruelty.[3]

During the early twenty-fourth century, a number of nations begun to merge to form large and stronger nations. This prompted Marsden's neighboring nations, the Tamar Pact and Federation of Skye, to begin talks with Donegal to merge. Fear of the Draconis Combine prompted Tamar's leader Kevin Tamar to call for official talks to merge in 2339.

Robert traveled to Tamar in 2340, where he met Kevin Tamar and the Federation of Skye's Thomas McQuiston. The leaders could not decide on what kind of government to form initially. Tamar proposed a system of nine Archons, whom would govern small realms within their proposed nation, not unlike ancient greet city-state system. Reluctantly Robert, and Thomas agreed to go with this style government due to lack of better ideas. Robert proposed that they adopt a Greek symbol for their nation, the Grecian Lyre, a three sting harp. Thomas agree, felt that name lyre would be a fine name for the their nation, Lyran.[4]

The initial years were troublesome, Robert and others leaders had difficulties agreeing on how things should be done. It took four years to hash out who should be the nine Archons of the Commonwealth. The leaders of three found nations became Archons, as did their deputies, and they designated others who were elected Archon Treasurer, commander of the Commonwealth's defense force, and secretary of transportation. However, the lead position, Archon Basileus, could not be decided.[5]

By 2375, the nation was experiencing an economic roller coaster. Multiple archons, having same powers as each other, triggered economic woes and plunged the budget into the red. These problems caused chaos and recession. The people of the Tamar Pact threatened to break with the Commonwealth to file a peace treaty with the Draconis Combine. Skye and Donegal each had their own separatist movements, too. Robert had enough, so he begun a plan that would bring nation into order. Marsden began to secretly collect evidence of the other archons' illegal activities. In his younger days, Marsden had served in the Protectorate's armed forces and had friends who were still in the service. He contacted loyal still-active comrades and they begun to form the core of a new military around the Commonwealth. He his next act was to take a tour of various worlds of the Commonwealth, ostensibly to see the nation's economic state. Robert met with leaders who were critical of the current government's activities and convinced them to support him. He then placed members of his loyal staff in key communication centers throughout the Commonwealth.[6]

After the pointless meeting of the archons in August, Robert waited until the other archons were in transit to their homeworlds. He then issued a public, Commonwealth-wide message to all the people of the nation. The messages listed the abuses and corruption of other archons. He then declared that he was forming a new parliamentary-style government and he claimed the title of Archon Basileus, the King of the Archons, for himself, making him the sole power of the nation. His announcement and the evidence he presented caused the public to be outraged and turned to support Robert's new government. In December, Robert was elected to the post of Archon Basileus of the newly formed Estates General.[6]

In his first official acts as Archon, Robert imprisoned the former archons for life for corruption and crimes against the nation. He then submitted a document to the Estates General, the Articles of Acceptance. The treaty, written by Robert, outlined the rights and responsibilities of each member world to the Commonwealth. Robert had written rules and guidelines loosely, thus allowing each individual world many freedoms. A number of worlds signed the document, however, others, fearing the Commonwealth was moving away from its original intentions, hesitated and opposed the new government.[6]

Archon Robert was faced with twenty-two worlds in rebellion by January 2378. He dispatched military forces to blockade many of these worlds into starvation, convincing them to give up their resistance. Eight self-sustaining worlds held out, however, including Skye and Tamar. He launched what was described as a bloody campaign against these rebellious worlds. Invading each of them, his forces crushed each of the rebellious planetary forces. This action did not leave Robert with a good reputation, being given the nickname, "The Crusher". However, it did give his people what he wanted for them, a decisive government.[6]

For the next decade and a half, Robert continued his reforms to revive the Commonwealth's economy. His efforts bore fruit when the Commonwealth became the leading exporter to the rest of the Inner Sphere. It also allowed the Commonwealth to establish lucrative contracts with the Terran Hegemony, allowing them access some its military information.[7]

As Archon, Robert also expanded the Commonwealth's military, promoting those who were loyal to him. He recruited such people from supportive worlds and ensured his army's loyalty to him. With an increasingly robust economy, Robert was able equip his military with the best equipment available. The bolstering of the Lyran military kept House Kurita from planning any major incursion into the Commonwealth.[7] 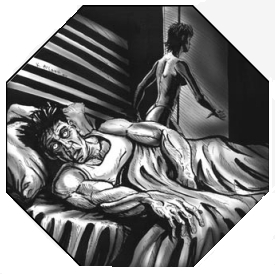 A depiction of Robert Marsden at his death

In 2395, Robert causally commented that he wouldn't mind drinking a magnum of champagne from the House Marik world of Promised Land. Due to their bolstering and increased power, over-confident military leaders decided to act on the Archon's casual remark. The Archon heard of the mission far too late to stop the ten regiments of Commonwealth troops from the assault. The mission turned disastrous, with every single unit deployed for the Promised Land Assault wiped out. Instead of blaming their own impetuosity, the Lyran Commonwealth Armed Forces high command directed blame towards Marsden for "ordering" the disaster. Three weeks later, the Archon was dead, reportedly from a heart attack.[7]

Rumors of Robert's cause of death swirled as soon as the news of his demise had been made public. Many refused to believe that the 44-year-old health nut with no history of cardiovascular disease fell victim to a myocardial infarction. Popular opinion fingered the High Command, upset by the Promised Land debacle. Only three weeks after Marsden's death, the Royal Arcturan Shakespeare Company surprised their dignitaries with a rendition of Hamlet. A number of officers who were members of the High Command were in attendance and left midway, furious at the implication the troupe made by putting on the play of betrayal and death. In 3067, personal letters written by Robert to an unidentified woman surfaced. Due to the letters' racy content, it's believed that this was the reason Robert's cause of death was covered up. However, the identity of the woman and the circumstances that led to Robert's death have been lost to time.[7][8][9]