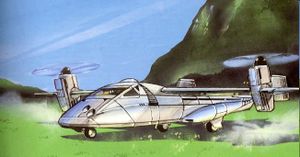 An example of a VTOL, the Karnov

A VTOL (Vertical Takeoff and Landing) craft is one that uses thrust to takeoff or land vertically, usually with the assistance of propellers and/or rotors. The most common VTOL craft is a helicopter, though traditional-looking airplanes can use vertical thrust to achieve the same result, often at a higher rate of speed. VTOLs often excel in situations where traditional aircraft would not have the space to takeoff or land, such as on aircraft carriers or in restrictive terrain such as mountains.

In Classic BattleTech, VTOLs have a maximum weight of 30 tons. They are typically able to achieve very high cruising/flanking speeds due to their light weight and suspension factor (which reduces the weight of the engine needed to achieve a given speed for the vehicle).

VTOLs can move not only forward and backward, as 'Mechs and tanks, but also up and down elevation levels. Each elevation change costs 1 movement point (MP), as does traversing hexes. Elevation changes also count as hexes moved when determining your movement modifier.

VTOLs moving at flank speed must make a piloting skill roll when executing a turn. If the VTOL fails its skill roll, it will sideslip into the next adjacent hex on its previous vector of movement. If a VTOL accidentally sideslips into woods or other solid terrain features, the VTOL crashes. The VTOL avoids crashing if it is at a higher elevation level than the terrain features.

To resolve a VTOL's crash, divide the VTOL's weight by 10, and multiply that number by the number of levels fallen. For example, a 20 ton VTOL at elevation 6 crashes and falls to elevation 0; 20/10 = 2, 2 x 6 = 12 damage. To determine the location of the damage, roll 1d6: 1=Front, 2,3=Left Side, 4=Rear, 5,6=Right Side. Divide the total damage into 5 point chunks and roll them out on the VTOL Hit Locations Table. In the above example, the VTOL would take two 5 point hits and one two point hit. If the table says the crashing damage is applied to the rotor, but the rotor is already destroyed, the damage goes to the appropriate armor location. If the internal structure of the VTOL is destroyed in any location (except the rotor), the crew is killed.

VTOLs may only mount 2 armor points on their rotors, but have the standard armor limit for combat vehicles on the chassis. Under Total Warfare rules, VTOLs struck in the rotor take a greatly reduced amount of damage, but reduce their movement speed.