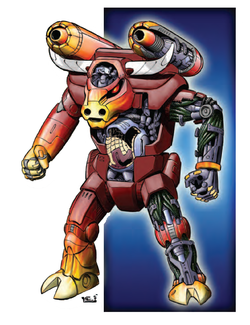 First created by Clan Smoke Jaguar, ProtoMechs were designed as a way for armored troops to deliver the firepower of a BattleMech to the battlefield without requiring a large amount of production resources.

In the months after the Battle of Tukayyid, Clan Smoke Jaguar found themselves with a serious problem. Guerrilla raids and uprisings within their Inner Sphere occupation zone had left them stretched to the limit in resources. Smoke Jaguar scientists found that if something wasn't done soon, their Clan worlds would soon be stripped of the ores needed for BattleMech production.[1]

The Clan's top scientists went to work on a radically different battlefield unit design that would combine elements of BattleMechs and those of Elemental Battle Armor. Standing only half the height of a BattleMech, the smaller units would mass only one-tenth that of the larger machines. This, combined with their smaller engines, would allow the Smoke Jaguars to make many more of these for less material. Dubbed ProtoMechs, the ultimate goal of these machines was for a Point of five, working in unison, to be as effective as a BattleMech, while requiring less than half the amount of construction resources. At the same time, Smoke Jaguar geneticists began the task of creating a suitable breed of pilot. Unlike the bulky Elementals, this new breed would need to be smaller so that they would be able to fit into the cramped confines of a ProtoMech's torso. Knowing that their Khans would not even consider full-scale production of ProtoMechs until they were proven effective in combat, the Smoke Jaguar scientists and geneticists began working on the project in secret, understanding that it could be years before their work could be revealed.[2]

It was not until the development of the Enhanced Imaging (EI) system by Clan scientists that the ProtoMech concept became a viable one. The EI control system laid the groundwork needed by Smoke Jaguar scientists for controlling the ProtoMech. The ability to give the pilot direct neural control eliminated the need for a gyroscope and full-sized cockpit. This gave room for the pilot to ride in the torso while still allowing ample space for weapons.[3]

However, the problem of finding suitable pilots was harder to overcome. Attempts made to breed a new kind of warrior for the ProtoMech ended in failure, leaving the scientists no choice but to use volunteer Aerospace pilots who had failed to test into the Warrior Caste. As happenstance would have it, the decision proved fortuitous: Clan aerospace pilots' small bodies allowed them to easily fit inside the cockpit of a ProtoMech, while their brains and circulatory systems, bred to withstand high-G maneuvering, could better endure the negative side effects associated with the EI system.[4] Other "volunteers" were obtained by a trial of possession with Clan Jade Falcon, where the Jaguars won and adopted several solahma aerospace pilots.[5]

ProtoMechs achieved their baptism of fire during the Battle of Huntress, which was also when Smoke Jaguar Khan Lincoln Osis first learned of the program. His outrage at having been uninformed about the secret project was tempered by his Clan's dire needs and the good performance of the ProtoMechs against desperate odds. Although the battle was ultimately lost, the ProtoMech's debut could not be ignored by the other Clans. After the Great Refusal and the destruction of the Smoke Jaguars, many Clans launched raids on Huntress in order to acquire the technology for their own purposes. Clan Coyote and Clan Blood Spirit were among the first to adopt the ProtoMech and pursue its development with enthusiasm, the Spirits especially, as they suffered a big lack of resources.[6] [7][8] Nearly every Clan obtained ProtoMech salvage on Huntress, producing them in limited numbers. The Blood Spirits were the first Clan to begin a full-blown training program.[9]

The Inner Sphere, however, showed little to no interest in developing their own ProtoMechs. One of the major stumbling blocks was the need for EI in order to control the machine; even if it could be copied, the moral and ethical problems associated with the system would prevent widespread use. Inner Sphere scientists also lacked the technical knowledge to recreate the special internal structure, armoring and heat sinks which went into ProtoMech construction, which would have resulted in bulkier, less-effective units.[10] The only Inner Sphere faction known to have moved beyond theoretical discussions was the Word of Blake, overcoming the control and pilot size issues with the development of an advanced pilot interface based off their Vehicular Direct Neural Interface technology, encasing a limbless Manei Domini in a life-support apparatus that was then sealed within a ProtoMech, the pilot maintained via intravenous nutrients and recycled biomatter. During the early experimental stage, the technical limitations preventing the construction of Inner Sphere ProtoMech chassis were side-stepped with the Word utilizing captured Clan models. The only known combat deployment of these hybrid ProtoMechs was during the Blakist strike against the Capellan Confederation world of Necromo in late 3071 and it is not known if they were the first of their kind or a technological dead-end.[11] During the Dark Age the ProtoMech appears to be used exclusively by Clan units. By that time still were produced and used some first-generation ProtoMechs.[12]

ProtoMechs mass between two to fifteen metric tons and stand anywhere from four to six meters in height, with the cockpit mounted in the upper chest. With their fusion engines, they can move considerably faster than battle armor but are more compact than BattleMechs. As such their agility falls somewhere between infantry and 'Mechs: they can move through most buildings with minimal collateral damage and can go from a prone to standing position in seconds. Like battle armor and 'Mechs, Protos can mount jump jets which further increases maneuverability. ProtoMech armor is more efficient in terms of its weight-to-protection ratio compared to 'Mech armor due to the reduced surface areas involved and advanced composite material used in its construction; the heaviest ProtoMechs can boast almost as much protection as some light 'Mechs. Additionally, the Proto's small size makes it harder to hit, and even if it loses an arm or head the unit can remain combat effective.[13]

The connection between a pilot and their ProtoMech is much more direct than with BattleMechs: the pilots feel as though they "are" the machine, giving them unsurpassed control and speed. However, this direct connection also means than the pilot can feel "pain" inflicted on their machine via neurological feedback not unlike that suffered by MechWarriors. For example, when the ProtoMech's arm is torn off, the pilot feels a great deal of pain, almost as their own arm had been ripped away. The sympathetic bond between man and machine can also lead to a kind of "god complex" in which the pilot feels as though they are unstoppable. They may become reluctant to leave their machine, and may even start to believe the ProtoMech is their own body.[14]

Due to their size and tonnage, ProtoMech weapon loadouts are somewhere between that of battle armor and 'Mechs. Most Protos have a "main gun", a single weapon or piece of equipment of any weight which is braced to the torso but aimed and fired with their hands. Wielding the "main gun" almost as easily as a normal trooper would a rifle gives the ProtoMech a more flexible firing arc and makes training new pilots easier. Two additional weapons or pieces of equipment can be mounted on the torso, though their combined weight cannot exceed two tons, and each arm can mount one weapon no greater than a half-ton in weight. ProtoMechs can carry most of the same weapons and equipment as found on 'Mechs, although instead of carrying standard missile launchers they mount groups of missile tubes together.[13] Weapons such as the ER Micro Laser and Light Machine Gun were initially developed by the Smoke Jaguars specifically for ProtoMechs, though they have since spread to other combat units.

For all their benefits though, ProtoMechs have several drawbacks (beyond that associated with using EI). Because of their size and the specialized nature of their construction and components, ProtoMechs cannot utilize XL Engines, Endo-Steel, Ferro-Fibrous Armor, Targeting Computers, Double Heat Sinks or MASC (though they do have access to a superior alternative to MASC, in the form of the ProtoMech Myomer Booster). ProtoMechs nine tons and under are also not equipped with ejection systems, and cannot dump ammunition in an emergency. Additionally, though the highly-advanced heat sinks used by ProtoMechs means they never build up heat from firing their weapons or moving, they are more adversely affected by extreme temperatures, including fire and Inferno ammunition, than 'Mechs. Those equipped with arms are also unable to flip or reverse them, requiring that they twist their torso to hit opponents directly behind them.[13]

Like other units, the individual ProtoMech designs have their own roles which are determined by speed, armor, and equipment. Some, like the Siren, use their high speed for recon work. Others like the Gorgon can provide fire support, though not to the same degree that heavier vehicles can.

Besides the standard biped ProtoMechs ranging from 2 to 9 tons, UltraHeavy ProtoMechs also exist ranging from 10 to 15 tons (overlapping in tonnage and capability with some BattleMechs), and there are also both Quadrupedal and Glider ProtoMechs.[15]