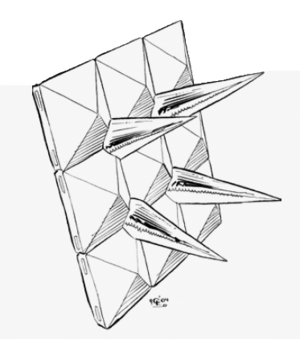 Spikes have been used as decoration on BattleMechs for centuries, but had no effect in combat. The Federated Commonwealth changed that in 3051[1] when it introduced reinforced and strengthened Spikes capable of inflicting damage on enemy units in close combat. Based on the same engineering reports that gave birth to the Lyran Commonwealth's Hatchet, these experimental melee weapons have demonstrated their effectiveness in the Solaris arenas.

The Spikes used in the arenas serve two purposes:

In the up-close and personal fighting style most arena warriors employ, Spikes become very dangerous to their enemies. The only drawback to the combat ready Spikes is the increased weight and space they consume when compared to their decorative counterparts. Each cluster of Spikes takes up as much room as a Small Laser. If a warrior isn't going to engage in melee combat, then the Spikes become useless.

Each location can only mount one cluster of Spikes. Spikes mounted in the torso cover both the front and rear arcs. Whenever a location mounting a Spike cluster takes a physical attack, the damage inflicted is reduced by 4 points (but the attack will still inflict at least 1 point of damage). In addition the attacker suffers 2 points of damage from the Spikes based on the type of physical attack (a punch or kick damages the appropriate limb, while a charge inflicts damage to the center torso; Death from Above or push attacks damage both legs or both arms). If the physical attack comes from a melee weapon, the attacker takes no damage.

When the Spike-equipped 'Mech makes a charge attack, the controlling player can choose to use torso-mounted spikes to inflict more damage. This decision must be declared before the charge's to-hit roll. If the charge is successful, the attacker adds 2 points of damage for each cluster of spikes mounted in the torsos. Damage inflicted on the attacker's torsos from the charge will be reduced by 4 points.

Any time a location mounting Spikes takes damage, the attacker must roll 2D6. The Spikes take a critical hit and are destroyed if the roll is 9 or higher.[2]

Each cluster of Spikes has a defensive Battle Value of 4.[3]