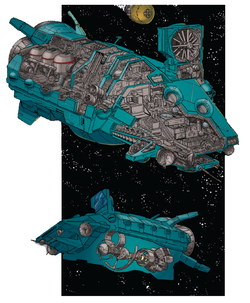 Because of their jump capability, WarShips technically fall into the JumpShip category, but unlike these non-combatants, WarShips are typically geared for space combat. They outclass most JumpShips and virtually any DropShip by an order of magnitude in size and power.

WarShips could be described as super-large combat JumpShips. However, they do not suffer from the lack of mobility normally associated with JumpShips. Powerful transit drives enable WarShips to move through space like DropShips - including combat maneuvering with acceleration exceeding 1g (often multiple g's).

However, unlike DropShips, WarShips are incapable of atmospheric operations and cannot safely land. The WarShips only can be built and maintained in the most modern Shipyards.

Considered the pinnacle of starship engineering, the defining aspect of a WarShip is its Compact K-F Drive, an expensive component that has only half the mass of a similarly powerful regular K-F Drive but greater structural integrity, parameters useful for combat but next to useless for regular JumpShips. All ships mounting a compact K-F drive core are therefore considered WarShips by default, even if they technically serve in a support role.
By contrast, JumpShips with a regular (civilian) K-F Drive core are never considered WarShips. Many are entirely unarmed and even the ones carrying weapons are considered non-combatants. Even the few carrying military-grade armament are referred to as Jolly Rogers, not as WarShips.

Many, but not all, WarShips have Hardpoints that allow them to carry DropShips with them when jumping, further increasing their cargo capacity and combat capabilities. However, they cannot use their transit drives for anything beyond station keeping at jump points like regular JumpShips while DropShips are attached to the hardpoints; maneuvering with DropShips attached would wreck the docking collars which are not designed to withstand such stress.[1]

The upper size limit for WarShips is 2.5 million tons, which is the largest mass for which a compact K-F drive can be constructed. The 1,930,000 ton McKenna-class introduced by the Star League in 2652 used to be the largest combat WarShip class and the 2.3 million ton Newgrange-class yardships launched in 2600 was the largest support WarShip class until they were both eclipsed by the 2.4 million ton Leviathan class that was built in the 3050s.
The Potemkin-class troop cruiser, introduced in 2611, features the largest number of hardpoints ever mounted on any starship class, an unmatched 25.
The smallest ship class ever to be called a WarShip is the 6,100-ton Bug-Eye-class of surveillance vessels, though their drive is a special "sub-compact" K-F Drive which, together with their role, makes the classification somewhat arguable. Otherwise, the smallest known WarShip is the 100,000 ton Nightwing class corvette, also primarily a surveillance vessel.

The first designated WarShips in the sense of jump-capable combat vessels, the Dreadnought-class, were deployed by the Terran Alliance, with the eponymous TAS Dreadnought launched in 2300. Many WarShip classes of ever increasing size would follow.

By 2750, at the height of the Star League, fleets of thousands of these behemoths roamed the stars, enforcing the League's will.

When Aleksandr Kerensky departed the Inner Sphere with his forces they took 1,349 JumpShips with them, escorted by 402 WarShips.[2] Only 260 WarShips are known to have survived the Exodus Civil War; it is estimated that by the mid-3050s, the Clans between them had built anywhere from 50 to 300 more. While each invading Clan fielded 18 WarShips on average in the Inner Sphere during the initial Clan Invasion, the actual numbers differ wildly from Clan to Clan. Clan Jade Falcon deployed the single largest number of WarShips, fielding 28 in total in the invasion of which most were Aegis-class. Clan Wolf deployed the smallest number (2 ships).[3] During the Clan invasion, the Clan's WarShips gave them an almost unprecedented advantage over their Inner Sphere foes; for they lacked WarShips of their own due in part to either losses suffered during the costly Succession Wars, or the loss of maintenance and/or production facilities dedicated to keeping them operational.

The Succession Wars and subsequent decline into Lostech left no WarShips operative in the Inner Sphere. The last WarShips in the Inner Sphere were believed to be destroyed during the Second Succession War, namely during the Eighth Battle for Hesperus II in 2853, all others having fallen prey to combat losses, attrition and maintenance shortfalls save for a number of non-salvageable derelicts. Up until the beginning of the Clan Invasion in 3049, WarShips were thought to be essentially extinct. Only ComStar secretly maintained a small hidden fleet.

Following the Clan invasion and the rediscovery of lost technologies, WarShip construction restarted in the Inner Sphere. In October 3056, ComStar's First Circuit decided to allow the sale of transit drives for WarShips (which only the ComStar-controlled Rolls-Royce factories on Terra could produce at the time) to both the Draconis Combine and the Federated Commonwealth. The fanatical ComStar splinter group Word of Blake located drives from derelict ships that the Free Worlds League and Capellan Confederation could recondition and return to a functioning status. Further recovery of lost technology has since enabled most greater powers in the Inner Sphere to field operational WarShips, but only the most industrious of Successor States can construct more than one at a time because of their extreme costs.

Shipyard, with one of Clan Ghost Bear's Leviathan-class WarShips under construction
(Cover of the aerospace-centric Technical Readout: 3057)

WarShips are the largest starships ever constructed, and are incapable of landing or taking off from a planet. As such, they are built at orbital docks. They do not differ significantly from other spaceships (DropShips and JumpShips) in operation.

Generally, all later WarShips are equipped with a Lithium-Fusion Battery system. Those that did not include one in their initial design have often been upgraded to carry one.