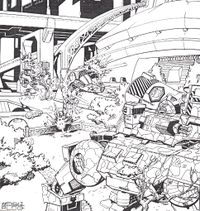 The Wars of Possession were a series of military conflicts initiated in April 3060 after Operation Serpent and the Great Refusal. The Annihilation of the Smoke Jaguars and the relocation of the Nova Cats and Ghost Bears to the Inner Sphere left a power vacuum of sorts which the other Clans scrambled to fill.

The bulk of the fighting took place from 3060 to 3062 and continued on a smaller scale until 3066. During this time Clan Space was rocked by both inter-Clan fighting and political machinations. These conflicts and power shifts would ultimately lead to even bloodier strife in the 3070s that saw the political landscape of the Clans changed forever.[1]

Clan Ice Hellion and Clan Fire Mandrill fought one another for the Smoke Jaguar enclaves on Atreus. The fighting dragged on until at least early 3062.[2] By mid-3067 the world was divided between the two Clans.[3]

The former capital of Clan Nova Cat, that Clan's warriors found themselves under attack by the Ice Hellions and Jade Falcons almost immediately following their Abjuration. Clan Diamond Shark then granted the Cats assistance with their evacuation efforts, in exchange for their remaining assets. After the Nova Cats' withdrawal fighting continued between the other three Clans.[4] All three still retained enclaves on Barcella as of mid-3067.[3]

Clan Snow Raven had recently taken ownership of Bearclaw's former Ghost Bear territories when the Nova Cats requested assistance from the Raven's sizable fleet in exchange for their enclaves on that world as well. The deal was made, but Clan Hell's Horses then arrived; their long-running feud with the Ghost Bears drove the Horses to seize their rival's former capital. The Horses attacked the Nova Cats, resulting in several small Trials until the Cats finally withdrew in September 3060.[4] By mid-3067 the Hell's Horses had claimed a quarter of the planet while the Snow Ravens held the rest.[3]

Cloud Cobra and Star Adder forces mounted several brutal attacks upon the Nova Cat garrison, but then allowed them to withdraw after guaranteeing that the remaining civilians would be treated decently by their new masters. As a result, when Clan Coyote warriors made their own attack upon Brim, they unexpectedly ran into strong Adder and Cobra resistance and withdrew, allowing the two Clans to consolidate their holdings on the world.[4]

Clans Wolf and Snow Raven fought one another on Circe over Clan Smoke Jaguar and Nova Cat's abandoned territories.[2]

The Nova Cat evacuation of Delios proceeded smoothly and the Diamond Sharks received their enclave in exchange for covering the Cats' withdrawal. The Shark's new gains remained unchallenged until May 3061 when Clan Coyote mounted several aggressive raids from its own Delios holdings.[4]

Clans Wolf and Jade Falcon battled one another for Clan Smoke Jaguar's territory on Eden in a series of Trials that lasted until at least early 3062.[2]

The Jade Falcons who attacked the Nova Cat territory on Gatekeeper considered their opponents dezgra and thus simply swarmed the Cats through weight of numbers. The Nova Cat garrison was destroyed attempting to buy time for their civilians to escape, though few made it.[4]

Hoard turned into a multi-Clan slugfest when forces from Clans Ice Hellion, Star Adder, Wolf and Hell's Horses wound up fighting each other more than the Nova Cats they had come to despoil. Losses were particularly heavy for the Wolves and Horses as they lacked a prior foothold on the planet and had to establish new bases. Despite this turmoil most Nova Cat warriors perished nonetheless, though a quarter of their civilians escaped.[4]

Clan Cloud Cobra sought to secure the Smoke Jaguar enclave on Homer in the face of Steel Viper opposition. Already outgunned, the Viper's situation grew worse when Snow Raven units landed with the Cobras' agreement and challenged their old enemies. The dispute was ended in late 3061 when Inner Sphere troops arrived.[2]

The former Smoke Jaguar capital became one of the most heavily raided worlds in Clan Space during this period, with almost every Clan seeking to acquire ProtoMech technology from the Jaguars' ruins. Only five Clans actually tried to secure territory on the planet, however. Clan Jade Falcon expanded outward from their preexisting enclave to secure almost half of Jaguar Prime, the Star Adders claimed Myers, and Kindraa Matila-Carrol of Clan Fire Mandrill took Pahn City. The Goliath Scorpions and Ice Hellions were left with the less valuable real estate (Continent Abysmal and the Path of the Warrior Peninsula, respectively), while the SLDF enclave at Lootera remained untouched.[5]

The Smoke Jaguar enclave on Kirin was secured by Clan Hell's Horses without violence[2], giving that Clan complete control over the world.[3]

The former Smoke Jaguar holdings on Londerholm were contested by the Coyotes and Ice Hellions; the fighting lasted until at least early 3062.[2]

While the Ghost Bears had gifted their territory on Tokasha to the Diamond Sharks, the Jade Falcons had already positioned themselves to attack the enclave themselves. Facing Goliath Scorpion units as well, the Sharks opted to withdraw after token resistance and reinforce their new gains on Paxon.

At this point the Hell's Horses entered the fray, hoping to secure the territory of their old enemy. The three-way fighting between the Falcons, Horses and Scorpions raged on until a brief cessation of hostilities in late 3060, then erupted again in 3061. In the end the Falcons gained about two-thirds of the planet, with the Scorpions holding a quarter and the Horses the rest.[2]

Unlike many of Clan Smoke Jaguar's abandoned enclaves, that on Tranquil fell to Clan Wolf without any fighting[2] and that world became an exclusive possession of the Wolves.[3]

The long-running dispute between Clans Smoke Jaguar and Diamond Shark was resolved with the latter's complete takeover of that world.[2]