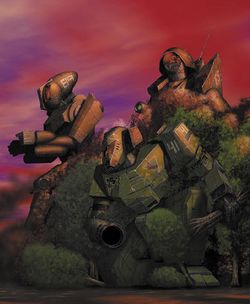 Founded by Colonel Dai Da Chi of the Red Lancers.

Sent on Tikonov at end of the Steiner-Davion civil war, allegedly to assist Victor Steiner-Davion. Victor could not allow the unit to travel with him to New Avalon, fearing they would fight with the Blackwind Lancers. Left on garrison duty, House Dai Da Chi then claimed the world for House Liao following a battle with the 23rd Arcturan Guards. They moved to assist the besieged Guard, and were purportedly fired on by the 23rd. Later, they were instrumental in driving the Free Republic Revolutionaries from Tikonov. Dai Da Chi lost twenty percent material in the battles.

During Operation Sovereign Justice Warrior House Dai Da Chi spearheaded one of the Capellan task forces that countered the Federated Suns's assault. They faced AFFS forces on New Syrtis and Almach. During the Jihad they faced off against Word of Blake forces on Foochow and later smashed all Blakist resistance on Poznan. As of 3079, they remained on Poznan, guarding the world for the Confederation.[1]

During their counterattack into the Federated Suns, the troops of Dai Da Chi routinely destroyed civilian targets including power stations and manufacturing centers. Many of the planets they attacked had their power plants and spaceports rendered inoperable, increasing the time it took to recover from the assault. This method of wanton destruction even extended to their own worlds when fighting the Word of Blake. On Poznan for example the House Master ordered two cities completely destroyed with artillery fire rather than try to root out Blakist forces in a house to house search.[2]

When the Republic of the Sphere counterattacked the Capellan invasion in 3082, Stone's Lament faced the soldiers of this Warrior House on Styk. Despite fighting hard, eventually the Republic unit forced the Dai Da Chi warriors off-world with heavy losses.[3] During this fighting, the Tao MechWorks plant on Styk was gutted.[4]

In 3085 Warrior House Dai Da Chi was the garrison for Westerhand.[5]

The Warrior House and elements of McCarron's Armored Cavalry landed on Palos in 3134. There they faced a Principes Guards unit. After three weeks of combat, the Capellans had taken the world.[6]

It is to be seen how House Dai Da Chi will continue, as years of brutal frontal assaults have claimed the lives of many of the House’s most experienced MechWarriors.[11]

House Dai Da Chi prefers stand up fights to running engagements and decimate most of the forces which meet them on equal footing.[13]

Note: At this point in time the unit was stationed on Drozan. [14]

Note: At this point in time the command was stationed on Drozan. [15]

Note: At this point in time the command was stationed on Drozan. [16]

The battles of Operation Thunderbolt and the Jihad reduced the Warrior House down to a little under two thirds of its pre-Jihad strength.[1]