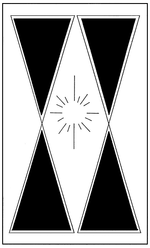 Keid was one of the first worlds settled when humanity took to the stars,[2] and was one of the worlds that remained a part of the Terran Alliance following the Outer Reaches Rebellion and the Demarcation Declaration of 2242,[4] later becoming one of the worlds within the Alliance Core region of the Terran Hegemony.[11] With its huge fields of arable land, Keid quickly established itself as a major exporter of foodstuffs and became the homeworld of several Terran Hegemony agribusinesses, including Dukempic Foods. In the twenty-fifth century, large deposits of metal ores and minerals were found on the world, prompting major companies such as Krester's Ship Construction to build manufacturing centers to exploit this wealth.[37][2]

The Star League Defense Force also established several bases on the planet. Chief among these were two Castles Brian, Fort Grissom and Fort Settlemyer, and the Fleet School of Keid. During the Amaris Civil War the Rim Worlds Republic troops assigned to Keid destroyed these SLDF facilities, along with several cities, college campuses, and all the orbital facilities, including factories and a shipyard. The Republican troops did not employ nuclear or biological weapons however, which allowed Keid's inhabitants to make a relatively quick recovery after the Amaris Civil War.[37][2]

Keid was taken by the Capellan Confederation sometime between 2785 and 2800.[38] After taking control of the world, the Capellans established a series of Maskirovka training facilities, scientific establishments, and noble landholdings.[39]

Following negotiations between Colonel Pavel Ridzik, chief military advisor to Chancellor Maximillian Liao, and AFFS Lieutenant General Ardan Sortek, conducted in February 3029 Ridzik created a new nation, the Tikonov Free Republic. The Republic was created by incorporating those worlds of the Tikonov Commonality that hadn't already been conquered during the first half of the Fourth Succession War. Ridzik returned to Elgin, the new capital of the Tikonov Free Republic, on the 3rd of March 3029 and swiftly began implementing a new government consisting of family members, friends and other appointees loyal to himself, purging dissident elements on the various Republic worlds and taking the opportunity to settle old scores. Keid was one of the systems incorporated into the Tikonov Free Republic.[23]

The September of 3067 a strike force made up of mercenaries wearing AMC colors hit the Kallon Industries warehouse district in Keid City, destroying millions of C-bills of technology and vital equipment and parts for the intercontinental maglev railway construction project. The mercenaries also started a fire that engulfed four high-rise apartment buildings, burning them to the ground. The death toll sits at 312 and was still rising as emergency crews search the still-smouldering wreckage for survivors. The mercenaries escaped the planet relatively unscathed, though Kallon Security forces did attempt to intervene.

Precentor Alvarez held a brief press conference to announce that the Word of Blake would send immediate assistance in helping Kallon import the necessary material to get the magrail project completed. He also announced the creation of the Keid Emergency Fund to assist those who were harmed and/or lost property due to the "callous disregard of AMC forces".[40]

This could have been also a WoB false flag attach to swap planet allegiance to the Word of Blake Protectorate .[citation needed]

After centuries of administration by the Capellan Confederation and Federated Suns, Keid is once again home to many large mining and agricultural concerns.[2]