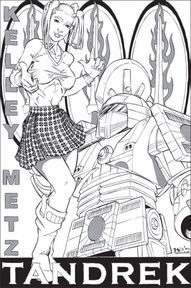 Kelley Metz was a member of the Davion military though she resigned because she could not accept the Davion-Steiner unification. She operated as an independent mercenary, periodically leaving Solaris for missions, though at some time she decided to center her career as a Solaris fighter.

In 3051 Kelley Metz was fighting for Tandrek Stables and ranked 18th in the Solaris Top Twenty.[1]

In 3062 Metz fought a memorable match against Erik Gray, then of the Skye Tigers Stables. Despite an impressive showing by Gray, Metz would prove victorious. [2]

Kelley was an up and coming MechWarrior for the Liao affiliated Tandrek Stables in 3062. During the '62 Class Six Championships, Kelley earned a shot at the title.

On August 13th, she fought against a MechWarrior named Michael Karufel. She was victorious, but she sustained a cerebral contusion head injury in that match.[3]

During her face off against Blackstar Stables' Michael Searcy in the Boreal Reach stadium. Where, stadium's holographic system created setting known as Hell's Canyon. Searcy, knowing of her injury, used his Pillagers jump jets to make it difficult for Metz to reach him. Ultimately, despite her brain injury, she attempted to use her Emperors jump jets to reach him. However, the lingering effects of her injury caused her to lose her 'Mech’s balance and fall. Unable to get her 'Mech to stand, she was forced to concede victory to Searny. The following night Searcy approached her, but she snubbed him, ignoring his attempt to talk to her.[4]

The Road to the 3067 Championship and the JihadEdit

Kelley took a year to recover from the injuries she incurred during the '62 championship run. In late 3063, she returned to the arenas and landed 15th in the total ranking of Solaris Warriors that year.

It was not until 3067, when she fought against previous year Solaris Champion, Ervin Rebelke for the Solaris VII Open Class champion that she attained the title for herself. She fought Ervin in his Customized Atlas with her Ti Ts'ang at the rebuilt Steiner Stadium[5]

On 24 September 3067 she was challenged to a duel against Steven Hendry who had retired as an arena fighter in 3054 but returned to Galahad Stables in 3060 and hoped to rekindle his career. As the Class VI circuit would not sanction the duel and would not permit it be held in a Class VI arena, Hendry and Metz agreed to fight the duel as a charity event in the Scrapyard arena in the reaches.[6]

In 3068 Solaris was invaded by the Word of Blake during the Jihad. In the course of the occupation, Kelley Metz was captured. The Blakists charged in when she was spotted in Cathay district of Solaris City. Where they gave chase, into the Xolaris suburbs where she smashed a mall and ultimately was forced to surrender when Metz was cornered in Bracken Swamp.

The Blakists forced her to fight in matches to the death as a propaganda campaign. Using her signature Ti Ts'ang she fought against a Lance of Blakist BattleMechs in Steiner Stadium. With no chance of survival, she charged into them with weapons blazing and taking damage from the Blakist 'Mechs. She conducted a jump attack and used her 'Mech hatchet, nearly hitting the cockpit of a Vanquisher assault 'Mech before it killed her. Although the event is undated, she was described as "last year's champion", establishing her death in 3068.[7]

Because of her injury in 3062 she had been experiencing dizziness interfering with her neurofeedback signal to her BattleMech. At the beginning of every turn she must make a Consciousness Roll at her current target number, and if she fails, all her Piloting Skills will receive a +2 modifier.[6]